The hairline is the frame to the face and makes the face that we recognize. A bald man appears different because he is missing the frame to his face. This cartoon brings that message home 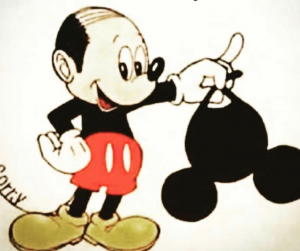 Men actually shed more hairs per day because they have a shorter anagen cycle. Women can grow their hair much longer than men so they lose less per day and regrow less as well. Women can grow hair as long as 3 1/2 feet while men can’t and often grow their length to no more than 18 inches in length. That means that using the formula of 100,000 hair on the head for a typical Caucasian, if the hair is shed after anagen, the women with 3 1/2 feet length hair will lose about 50 hairs per day while the male who will grow to a length of 1 1/2 inches will lose up to 100 hairs per day.

Diffuse Unpatterned Alopecia (DUPA) is determined when the hair in the field of view substantially exceeds 20% miniaturization.  I generally like to cut the hairs in the view so that it is easier to count.  One of these views is hitting up against the 20% number suggesting that better photo are ideal to pin down this diagnosis. The middle photo suggests that the miniaturized hairs are more than 20% but the other photos don’t back this up.

Birth control pills are high on the list as a cause for female hair loss.  When one pill doesn’t work, switching to another brand under control of your OB/GYN doctor who will address the hair loss issue is the route you should take

Are my hair follicles still there, just sleeping and waiting for some hormone or protein in my system to wake them up?

There are two groups of thought: (1) that the hair stem cells for the missing follicles are still there or (2) that the stem cell which have been inactive for a long time, just died off.  ?

I started using minoxidil to stimulate my beard. Will it harm my existing beard hairs?

Now I am 18 male and from the last 5 years I am losing hair that’s why the front portion of my hair had become so thin that one could easily see my scalp, 2 months ago I came to know that I have vit D3 deficiency it was 11.78 ng/ml, now I am under treatment so anyone can tell me how much time it will take to regrow my hair?

If you Vitamin D levels are low and this is the cause of your hair loss, you can expect to see hair regrowth in a year or less; however, as a male, then the loss is most likely genetic (99% probability),  Time will tell?

They say than pictures are worth 1000 words,  Great results from using finasteride and minoxidil in combination. If he would have been transplanted, the hairline would be lower, halfway between were it is and the highest crease of his furrowed brow which he nicely shows. 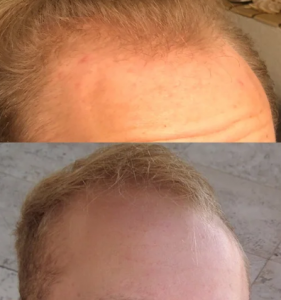 Toppik is a known and popular Hair Fiber/ Hair concealer. When used, it will not harm your native hair.

Female hair loss, unlike male hair loss, is rarely complete and most people believe that these hairs are still there, possibly cycling irregularly or poorly? When some new drug is discovered, we may find that the hairs that are not there, will appear.

The authors of this latest 2018 work is Durham University’s Dr. Colin Jahoda and US-based Columbia University’s Department of Dermatology, led by the renowned Dr. Angela Christiana. These are two of the most famous names in the field.

Never ask for 8000 FUE grafts. Unfortunately, too many patients want more hair and forget that if they take it from the back and side of the head, what is removed to fix the balding front, top and crown will be gone forever.  Now this man traded a bald look in the mirror (I am assuming that the transplant was successful) for a bald back and side of his head. Not Good! 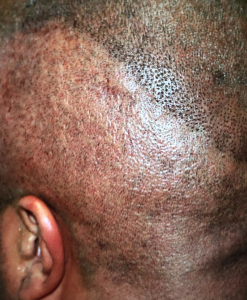 Update and new paper from Dr tsuji from tressless

Dr. Rassman’s Comments:  I fully understand the clinical science that is stated below; however, this reflects a minority of patients who take this drug who report side effects. Many people have no side effects and great results from the drug finasteride. Despite this, everyone on this drug should read these comments carefully because his concerns are real and as he said, if you are the one that is impacted, it is 100% for you.

The fact that this poison is still being regularly prescribed undermines the legitimacy and perceived objectivity of the American medical system and the pharmaceutical industry. There have been plenty of publications that have come out over the decade that have shown 5 alpha reductase inhibitors to be dangerous, even to those who appear to respond well to them, which I’ll link at the end of this comment. I am glad that the FDA was objective enough to deny the approval of these drugs as chemo-preventative therapies – who knows how many lives would’ve been destroyed if they’d been approved for that – and that they decided to finally label the drugs with serious warnings, but it’s not enough.

The risk of full-blown Post Finasteride Syndrome, while apparently low, is not something to dismiss. Additionally, the odds of developing side effects increases with time. These drugs have been shown to chronically lower neurosteroid levels, the most significant of which being allopregnanalone, which is responsible for anxiolytic, anti-depressant, pro-sexual, and other important effects. And as it turns out, DHT isn’t useless after puberty like many people seem to claim. There is no way to screen for who is at risk for post-5ARI syndrome and who isn’t. Even if the odds are low, you’re playing with fire. And many men who don’t develop the condition will still eventually have milder side effects, like a loss of morning erections, weaker erections, lower libido, increased anxiety or depression, etc. all to save a few thousand hair follicles. How do physicians justify this? It’s one thing to prescribe it for a hyperplastic prostate (and even that’s questionable), it’s quite another to prescribe it for vanity. Any physician that considers prescribing this drug for hair loss, as far as I’m concerned, should never be allowed practice medicine again, and should be sued for malpractice and negligence. Clearly they’ve never considered “first do no harm”.

Many physicians’ ignorance of what they’re prescribing is astounding, and the denial of a very real condition when it happens is, at the very least, cruel and pathetic. This sort of science-denial is akin to climate change “skeptics” or evolution deniers. I don’t think I need to explain why this is a terrifying trait to see in a licensed physician. The science is in and has been for years now.

Over-harvesting is a reflect of the total number of FUE grafts harvested, compared to your donor density, as defined here.

To find out if your donor area was over-harvested, ask your surgeon what your donor density was prior to the surgery.  In addition, I believe that the surgeon went too low into your neck hair which is not permanent hair. 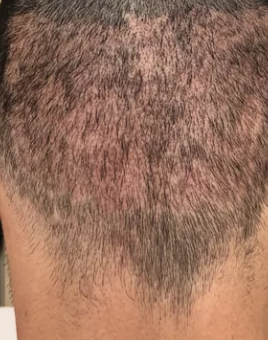