If you disease is under control and you understand the risks associated with having a hair transplant, then the answer is yes. There could be an increased risk of hair rejection if the autoimmune disease impacts the skin which can happen anytime after the surgery, even years out

“Generally speaking, a person has three stages of hair growth cycle: growth, degeneration and rest. In the first stage, the hair is a continuously pushed-out shaft, whereas the hair stops growing and its lower portion shrinks while staying in place in the second stage. In the third stage, however, the hair eventually falls out.
While it has been known for some time that stress is linked to hair prematurely entering the third stage and falling out, as is the overall link between hair loss and chronic stress itself, the exact mechanism behind this link had remained a mystery.
What is known is that hair-follicle stem cells (HFSCs) play an essential role in hair growth by interpreting internal and external signals. Knowing this, Cho and the other researchers tested the role another area of the body – the stress-hormone producing adrenal gland – played in the cycle. To do this, they removed them from mice via surgery.
Without the adrenal glands to produce stress hormones, the mice’s “rest” phase in their hair cycles was much shorter, while their hair follicles grew around three times more than normal. But when fed the hormone corticosterone, the stress hormone produced by animal adrenal glands, their hair growth was suppressed.
So does corticosterone play a role in making hair fall out? That’s what this implies. HFSCs detect the stress hormone through signals, and not by detecting the hormone itself. This was determined when the researchers selectively deleted the protein known as glucocorticoid receptors in the dermal papillae. These receptors are the means by which the hormone signals the HFSCs.”

I remember you saying that younger men tend to respond to finasteride well. Is that true? If so, how?

Yes, that is true:  When hair is recently lost, reducing the impact of DHT which suppress hair growth can be block by this drug in younger men. The longer the hairs are either miniaturized or have disappeared from your scalp, the harder it is to bring it back.

Trichoscopy, the examination of the scalp with magnification for diagnosis, is critical to be able to detect the presence of diseases that might be a contra-indication to hair transplantation. A hair transplant done on a person with FFA or LLP will fail. A biopsy of the scalp confirms the diagnosis.

The first picture on the left, shows a patient with genetic hair loss and a disease called Lichan Pilnopilaris (LLP). If this patient is not examined with a Trichoscope to make this diagnosis and had a hair transplant, it would fail.  Note the crusting around each of the terminal hairs that are typical of LLP. This is an autoimmune disease of the scalp.

The picture on the right shows a man who is 33 years old, and had corner recession typical of a genetic Norwood Class 3 pattern of balding, but Trichoscopic examination showed Frontal Fibrosing Alopecia (FFA) which is highly unusual in a 33 year old male but if he had a hair transplant, it would fail as the former patient with LLP. The picture shows the absence of vellus hairs which is typical of FFA. This is an autoimmune disease of the scalp that killed off all of the vellus hairs. 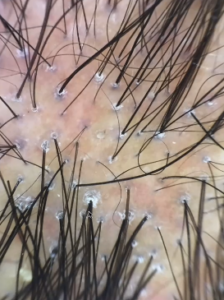 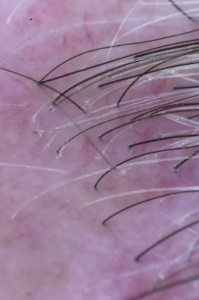 Nice results from microneedling with a microneedling using a dermaroller, dutasteride and minoxidil used for 18 months. This is an impressive return of hair. 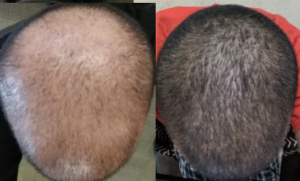 I had a 1500 follicle FUE transplant about 8 years ago by a surgeon on Harley Street. I regret having it done now. I get the feeling that others can see the gap between the transplanted hair and behind it where my hair is thinning. Also the transplanted hair stands straight up which accentuates the difference between it and the rest of my hair. I don’t want to have another transplant as I feel that I will always be chasing the receding hair!

I went to see the surgery a couple of years ago about a reversal and they advised against it. However, I wondered if anyone had experience/knowledge of whether it was possible to have the transplanted hair removed?

I would want to see your hairline and get some good pictures of what you are looking like before rendering an opinion.  I have fixed well over 1000 hairline patients. I find that the best way to fix it is to create camouflage that will take advantage of the poor grafts and fill it in with follicular units around and in front of the existing grafts (see here: https://baldingblog.com/actor-joe-penny-shows-off-his-repaired-hairline-with-photos/ ).

I’ve noticed a lot of hair transplants even relatively good/expensive ones the thing they seem to not ever really get completely “right” is the upper sides/temple corner area but like on the side still where hair goes vertical up side of head. I think it has to do with the angle at which the hairs are inserted which is it because naturally those hairs are at such a steep angle that they can’t replicate the same? Always seem like hairs there in transplants end up sticking out weird and randomly slightly. Was curious if there are any doctors or techniques that remedy this? Thanks!

This man had a mustache transplant with the hairs placed pointing in the wrong direction.  To fix this, each graft will have be removed and replanted 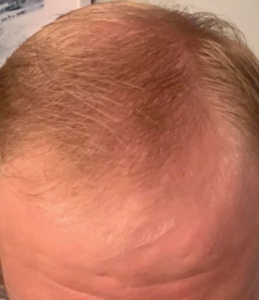 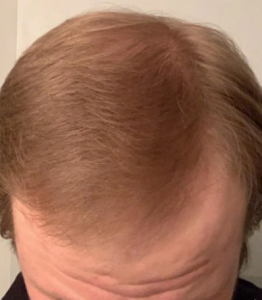 You can never be absolute with such a statement. Everyone is different. If there were no side effects from finasteride and you were balding, then yes, you would be better on it to slow down the coarse of hair loss which is the benefit for all men taking this drug, one way or another. If you don’t get side effect, the drug can, in the long term, also reduce your risk for prostate cancer in your senior years if you continue to take the drug throughout your life.

Amazingly sensitive young man who had unusually fast response to microneedling plus finasteride and minoxidil. Over time it will get better and better 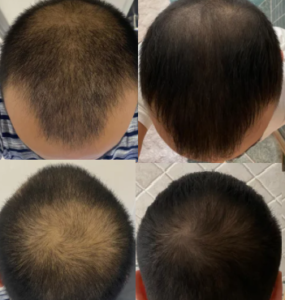