Dr:  Does shampooing daily affect miniaturized hairs? Should be reduce the frequency of shampooing and let the hairs become thick with the help of min & fin?

Shampooing does not impact miniaturization.

I came across a paper of yours with combining SMP and FUE. I think it’s a remarkable idea and it’s something I’m interested in doing. I had an FUE transplant completed with HLC last September (5 months ago). Do you know when is the earliest I could safely do SMP for both the recipient and donor areas? I would like to cover up the FUE scars and also an FUT strip from a much earlier surgery. I saw in one of your posts that you could do SMP 5-7 months following an FUE but I just wanted to confirm this with you. My clinic also told me after 5 months would be OK.

Also, I take oral finasteride, 1mg per day, and have been for a few years. It works well for me, I think, but I suspect I have some minor side effects, though it is hard to tell if it’s just a nocebo effect or from the medication. In Canada, a pharmacist developed a topical solution of 0.1% finasteride, 5% minoxidil. It’s a foam, which is appealing, as it has no PG. I went through some of the research and it seems that topical can be comparable to oral in terms of efficacy. Is the science on topical finasteride sound, in your opinion?

With regard to SMP, when the inflammation of the surgery is gone, then SMP can be done.  The surgeon will make that call but 5-7 months is reasonable.  With regard to topical finasteride, there is a big difference between the liposomal compounded version and what you are talking about.  The liposomal version keeps it in the skin while more leakage occurs with other formulations.

I had a bad hairline big forehead as a kid but when I finally came to high school my hairline became better and moved down a bit and the forehead didn’t look as big and i gained confidence until a barber messed me up horribly to the point my hairline wasn’t straight and looked it was receding and was the week before school started so i was obviously anxious and quickly wanted it to go back to normal so when my hair finally grew a lil bit i started combing it excessively to cover the areas which were pushed back by the barber which caused friction alopecia at that time i didn’t know i was making the situation worse for at least a year cause i chose grow out my hair which caused more combing to make sure my hairline wasnt showing due to the fact i have 4a hair and my hair usually stood up. I am now 19 i cut my hair short for 3 months to see if i was actually balding but there was no sign of balding and to my conclusion i lost my hairline to pulling the hair at the front a lot (like 5 times a day sometimes aggressively to make sure it stayed in place mainly to cover the balding edges).

I have been wondering to start using minoxidil or other treatments but i am unsure as it was my fault(friction alopecia) and wasn’t down to genetics and may make my hair worse also ive seen reports that I have to constantly use minoxidil or my hairline will be worse then when i started.

You need to see a good doctor in this field. Did you pull out enough hair that produced the hair loss. This is a condition called Trichotellomania. A proper diagnosis and treatment will follow and you need this!

I’ve been prescribed and have been taking dutasteride for about 3.5 years in hopes of delaying and preventing hair loss. I’ve been incredibly happy with the results of my hair, but have become concerned about the potential for long-term side effects. I have been considering a transplant, but currently have good coverage with the dutasteride. If I were to proceed with a procedure, would I be able to do it before/during my discontinuation of dutasteride? Or would I need to come off it completely and let my hair take its natural course before a procedure could be done?

There is no easy answer to this question.  How bald were you before you started the dutasteride?  Can you send me some photos of your before and your present after photos.  Then a discussion would be appropriate.,

Yes, fatty liver can cause hair thinning and it may reflect some other condition going on that could precipitate genetic balding if you have the genes for balding.  For most men (98%), thinning and hair loss is genetic.  Here is an article reflecting the general safety of minoxidil with regard to liver toxicity: https://www.ncbi.nlm.nih.gov/books/NBK548394/

Oral finasteride is much better than topical because it cover your entire head, even the hairs that you can’t see which are going into the early part of miniaturization. The topical only works where you apply it and it is VERY expensive but unless it is the liposomal preparation, it can go systemic. Example a one year supply of oral generic finasteride is $27 at Costco but a local liposomal topical finasteride (a type of finasteride that stays in the skin0  runs about $60-70/bottle which comes out to treating your hairline for about $800/year.

I’ve read about someone microneedling daily, with a dermastamp I think, at 1.5mm, with great results. Do you think this is unreasonable or even risky? Or just ineffective or suboptimal? It did seem to work for that person.

There is no reason to microneedle daily. There is a wound healing cycle that microneedling invokes and this can be stimulated once a week reasonably well.

Dads apparently been on it for 20+ years and don’t think he’s ever had problems. Says his hair hasn’t changed since he started. Is this any sign it will work/won’t give me side effects? Can’t find anything about this anywhere.

I don’t believe that finasteride responders are an inherited trait

How much hair comes out in the shower in a person not losing hair?

Hair that is shed is not coming out because you shampoo your hair (unless you to it roughly), it comes out because it is either going through its normal telogen cycle or you are losing it from miniaturization or genetic factors. Not shampooing your hair will make no difference in your overall hair volume or hair density across the scalp

A Liposomal preparation of a drug puts the active drug inside very tiny, fat-like particles. This allows more localization of the drug.  Men who have measured their DHT levels found that with the topical liposomal finasteride preparations, their DHT levels did not change.

The range where these stem cells are more heavily concentrated is the area between 0.5 and 1.5mm (Click on photo to enlarge).  If the needles get into this area, they will produce internal injuries to the fat in this area and that starts the cascade that induces stem cell response. I labeled it “Cycling Stem Cells” in the photo of a graft below. You should also notice that the actual hair shaft goes down much deeper than the Cycling Stem Cell area. 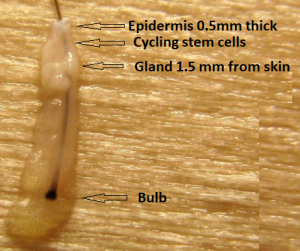 Quick question do baby hairs grow all over head but are mostly apparent around the temples and nape and hairline?

There are short vellus hairs that never grow up and there are hairs that are early in anagen that appear short. I have seen men who get good response from finasteride who show short anagen hairs that will eventually grow out once they have a few months of growth. There are also some short hairs that are at the end of their life and are frequently found in a hairline that is being lost through miniaturization. Is that what you are talking about with the term baby hairs?

Some folks don’t respond to 5AR inhibitors and find no other option but to quit and embrace baldness instead of consider the immunologic possibility of their hairloss. Could Lichen Planus and related illnesses be, in combination or by themselves, be accountable for hairloss on a relevant scale? Why aren’t we discussing this topic more?

The diagnosis of lichen planopilaris is a cause of alopecia. The diagnosis can be made using a trichoscope by seeing perifollicular erythema, milky-red areas, classic white and blue-grey dots. This is an autoimmune disease that kills off the hair. It is more common in women than men, although the diagnosis is being picked up more so in some men lately. If a surgeon doesn’t make the diagnosis and does a hair transplant, the transplant will fail. A costly mistake. A biopsy usually is the final authority for the diagnosis.

You are developing miniaturization leading to corner recession of the hairline.  It looks like it may extend to more of the frontal hairline than you are showing here.  This is the best time to begin treating it as reversal is possible. 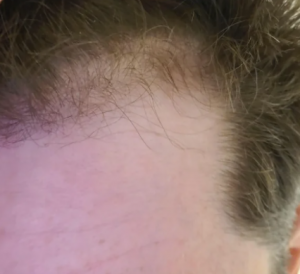 This is an good result in a young man who appears to be responsive to these medications. 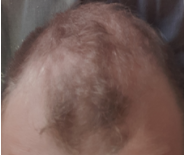 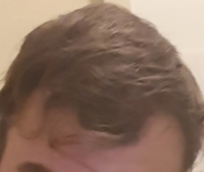