I have come to know that someone called SK has discovered a Yoga exercise called balayam is effective in curing baldness and hairloss. If you want to know more about balayam please log on to balayam.com 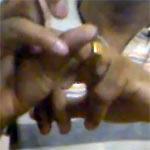 Controlling stress can help with balding that was caused by stress, but I would sincerely doubt any yoga technique is a “magical yet simple way to cure baldness” as that site states. Who doesn’t love a good magic trick? Sorry, but no yoga move will reverse genetic hair loss.

I just watched the video of this “magical” method and smiled when I saw that the baldness cure that everyone has been missing over the years was apparently the act of rubbing your fingers in a certain way. Well, at least the Balayam site isn’t charging people money for this stuff. See the video yourself at YouTube. And by the way… I’m only indulging this to leave you all with a smile for the weekend.

Article - Fiery Redheads Have More Sex
Product to Hide Hair Loss After Swimming?
Study Says Alcohol in Teens Damages the Brain, But Marijuana Use Doesn't
Open House in Los Angeles -- Saturday, November 3!
What Might a Hair Loss Cure Do for a Norwood Class 6?
Mapping Your Own Scalp for Miniaturization, Part 1
Get a virtual consultation with Dr. William Rassman and Dr. Jae Pak for hair loss options. You can learn more by scheduling an appointment.