The US patent office just issued Dr. Rassman and Pak a new US Patent called “Apparatus and Method for Mapped Hair Metric” Publication number US20120148127 A1

We continue to innovate in the field of hair restoration and this device is another diagnostic tool that may come to market in the near future. 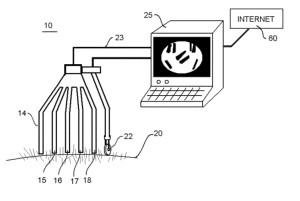 SUMMARY OF THE INVENTION
Prior art systems are available for obtaining measurements of hair to determine the degree of hair loss in areas measured. U.S. Pat. Nos. 5,331,472 and 6,253,771 and 4,807,163 and 7,098,910 and 7,006,657 and 6,993,851 are examples of such systems. Commercial software packages are currently available (TrichoScan by a Germany company Tricholog, and Folliscope by a Korean company Hairscience) for such purpose. But in order to provide a reliable metric by which to evaluate hair loss and even the effect of treatment, the status of hair loss has to be determined at different times over the same geographic area.

The prior art incorporates relatively small static images over a relatively large area for analysis. The present invention is based on the recognition that a streaming video analysis can also be incorporated to provide more data points in the algorithm.

The present invention is based on the recognition that a metric for hair loss can be produced by imaging areas of any hair bearing skin which are sufficiently large (i.e. 50,000 square millimeters of the human scalp) that the focal areas can be later revisited reliable where any offset in positioning would introduce only acceptably small errors. A map of the hair bearing skin or scalp can be generated by a compilation of the images to provide a reliable metric of hair loss status for comparison with the metrics previously generated. The invention provides a method and apparatus for geographically mapping user defined locations of hair bearing skin area with a bulk metric output. The metric values may be used to compare different user defined locations to quantify relative differences by location. The metric values may also be used to compare user defined locations at different time intervals to quantify relative differences over a period of time. The mapping and the metrics can be achieved more specifically by automated means by the analysis of multiple static pictures or the analysis of a live video covering a larger area than a single, static field of view. It also provides a method and apparatus for sorting and characterizing the relative diameter of a hair shaft by automated means in which the total cross sectional area of all the hair shafts in the interrogated field can be calculated. The automated method of obtaining this metric can be effectively used to acquire the bulk of hair over user defined locations and time intervals.

Hair on the scalp that is susceptible to androgenic influence may exhibit a relative decrease in shaft diameter and number. This phenomenon is sometimes described as miniaturization of hair as is described above. Miniaturization of hair may also be due to various disease states as well as the natural life cycle of hairs. The present invention incorporates a device to interrogate an area of hair bearing scalp. The image(s) are digitized and processed by a pre-programmed algorithm to differentiate the hairs against its background. This differentiation is quantified by automated means to express a value of number of hairs per area and Density (D). Furthermore, the aforementioned image is processed by another pre-programmed algorithm to differentiate the differences in hair shaft diameter (or its thickness) within the image field(s). This differentiation is also quantified by automated means to express a value of Miniaturization (M).

In effect, this automation produces metrics for Density (D) and Miniaturization (M). It also provides metrics for the bulk (B) of hair that is expressed as the total cross sectional area occupied by hair divided by the area under interrogation. This provides a quantifiable value in assessing the state of hair density, miniaturization, and bulk for the purpose of diagnosis. The variation of (M), (D), and (B) over different location and at different times will provide valuable information to the end user for the diagnosis and progression of hair loss or hair gain. The pattern of hair loss can also be determined with the aforementioned metrics. It is this ability to map out a metric based system for the status of hair loss at multiple locations sufficiently large to be accurately revisited and in a relatively short time window (seconds or minutes) that is the essence of this invention. When longer time intervals are used (weeks. months and years) an assessment of change in hair bulk can be measured. This method and apparatus would be particularly useful for documentation of hair loss or gain progression over time and/or hair gains in bulk after treatment regimens have had time to work. Drugs like finasteride (Propecia) are but one example of such a treatment regimen.

Another embodiment of the invention consists of a hand held device which a user moves from front to back along the scalp to establish a path of sufficient size to permit accurate measurements. The end user points the sensor end to the location of interest to obtain readings as the sensor is moved. The bulk of hair may be expressed in many ways depending on the aforementioned metrics and may incorporate the cross sectional area the hair shafts occupy in a field of interrogation. In this particular embodiment, a relative ‘hair bulk’ number may be expressed so that the end user can compare the value to the value at other locations or compare the value to other references on the individuals anatomy over time. This embodiment would conveniently have a recording and analysis function to keep track of the different data and reference points with dimensional locations mapped out. It could represent various static images or a ‘video like’ device that enables a person to sweep the hair bearing area along a series of tracks in a pattern that will, in effect, produce a more detailed map of hair bulk in the scalp, by area. In practice the device may be adapted to keep track of the velocity of movement and reference of a user defined location and record the time of data acquisition.

Another embodiment of the device utilized the same instrument without cutting the hairs to a small length. By using a combing device. The hair can be separated (parted) such that the scalp is exposed with hair on both sides, visualizing only the point where the hair exits the scalp before it is combed aside by the separating comb-like element. Standardization of the combing process is necessary in any one person and this can be accomplished by mechanical (comb) or pneumatic (air blowing) means.

Another embodiment of the device incorporates a miniaturized probe, like a ball point pen, which can be advanced over a section of scalp, separating the hairs as the probe moves through the ‘forest’ of hair shafts by mechanical or pneumatic (air blowing) means.