Is there such a thing a female mature hairline ? It seems quite common for a woman in her mid-twenties/thirties to have a larger forehead than she did in her teens, like Britney Spears or Cameron Diaz seem to have for instance. Or is this just the effect of using hair extensions, harsh treatments and the like over a long period of time ? 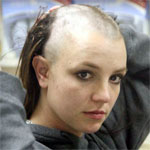 I do not believe that there is a maturing hairline for women, but some form of reshaping of the hairline may be seen.

In women who have had considerable plastic surgery, the corners of the frontal hairline often thin so significantly that I perform fill-in procedures for that area. Another possibility is as you suggested — traction alopecia can develop from the tight pulling caused by hair extensions, wigs, weaves, and similar.

Finally, some women are also just born with a higher hairline, and it’s possible that wearing wigs or professionally styled hair made it hard to notice in these celebrities’ younger years.