In an article just published in the Journal of the American Medical Association, Internal Medicine edition by Dr. Blayne Well et.al. , the impact of finasteride on patients with known depression were studied. Of that population, 272 patients out of 100,000 have a tendency for depression.  Could it be that these men, once identified should not be prescribed the drug finasteride?  Their concern was to determine if there was a suicide risk that increased because of the use of 5 alpha-reductase inhibitors which included finasteride and dutasteride.

The answer, in my opinion, to this is probably Yes, it is a good idea not to give this drug to people with known depression.  Note excerpts below: 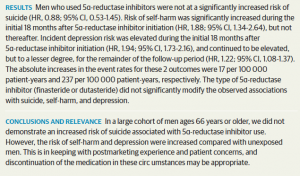 I Am 19 Years Old And I Am Balding Like My Norwood 5 Father.
Microneedling, Minoxidil, Finasteride and Much More in a One Hour Treatment Session
Generic Propecia in Canada?
Topical vs oral finasteride
I Lost 50% of My Hair in 1 Year, Then It Just Stopped Falling Out and Hasn't…
Why Not a Hair System Instead of a Hair Transplant?
Get a virtual consultation with Dr. William Rassman and Dr. Jae Pak for hair loss options. You can learn more by scheduling an appointment.