The effect of finasteride on spermatogenesis

I was wondering if you had see this study on hampsters? It concluses that animals treated with finasteride showed significant changes to the testicular seminiferous tubules as well as on spermatogenesis when compared to the control group.

Sounds scary! Is it something to worry about? 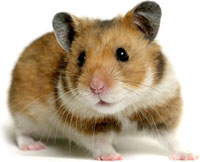 OK, but how did their hair look? If you have a pet hamster who is balding and you are concerned that he may not reproduce on finasteride, then you have a real problem.

In all seriousness, this might be interesting to some degree, but it isn’t enough to even consider being worried about. I’m not a veterinarian, but I can clearly see there are vast differences between humans and hamsters. Besides, the study says they gave the equivalent of 5mg finasteride to the hamsters… and unless you have prostate issues, you shouldn’t be taking that much anyway (1mg is for treating hair loss). And for those men with prostate issues (which usually occur later in life), getting a girl knocked up isn’t high on the to-do list.