Studies comparing two groups (1) people who stay on finasteride vs (2) those that do not take it or stop it show that those on finasateride keep hair counts higher for longer. Some further studies by others seem to show that the spread between the two groups continue past 5 years and from my clinical experience I have seen it extend to 20 years. For those that take it and stop it, they shift to the lower curve fairly fast (3+ months) which I have also seen in my practice. 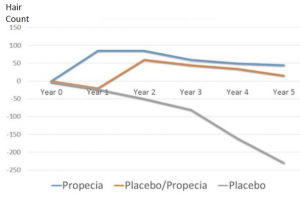 Why Is Dutasteride Not Approved by the FDA in the Us?
I Went to Turkey for an FUE 4 Weeks Ago and Now I Have Pain and Swelling…
I had 3000 grafts and got hit in the head 1 week after surgery and lost two…
Biopsy to Diagnose Telogen Effluvium or MPB?
Dreadlocks cause balding (photo)
Great Hairline, Thin Top and Crown, Low on Donor Hair (with Photos)
Get a virtual consultation with Dr. William Rassman and Dr. Jae Pak for hair loss options. You can learn more by scheduling an appointment.