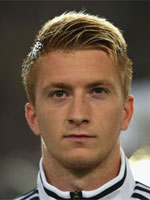 What sort of hairline does German football player Marco Reus look like he has?

I’ll admit that I don’t have the foggiest idea who this is, but Google Image Search was able to show me some photos. Photo 1, Photo 2, Photo 3

From the photos I saw (links to a random 3 above), it appears to be a solid hairline with possibly a slight bit of corner recession. It is difficult to be sure if there is really balding present, but I suspect there is some maturing of his hairline, as seen in photo 2 (some photos appear that he styles the hairline corners to mask this). In any case, this young man has the hairline that many men would be envious of.

My Chest Hair Pattern is Similar to Males in My Family -- Will I Have Their Hairlines?
From Bowling Ball to Gorilla (with Photos)
I Want My Juvenile Hairline Back!
Why Does this Transplanted Hairline Look Weird? (with Photo)
How Is it Even Possible for Finasteride to Worsen or Accelerate a Receding Hairline?
Real Examples of Norwood Classes
Get a virtual consultation with Dr. William Rassman and Dr. Jae Pak for hair loss options. You can learn more by scheduling an appointment.