I will tell you what I think. The design of the hairline is terrible, the multiple V-shaped protrusions of the hairline is absolutely abnormal. In addition, the crusting is terrible and the patient was never instructed on how to take care of his hair transplant after the surgery.  Imagine, walking around looking like this?

How did the doctor decide to do such a transplant?  The answer is that they did not want to make a straight hairline and maybe he did not know how to do this.  This saw-tooth hairline is most certainly as bad as a straight hairline. A feathered hairline is what you see in a non-transplanted person. Just look at any woman or man’s hairline and you will see that there is no such thing as a hairline, just a place where a bare forehead transitions into hair with a “no-hairline hairline”. Below is an example of just one of over 15,000 surgeries we have done creating feathering hairlines. As you can see, this man (below) does not have a hairline at all, just a feathered transition from his forehead to a full head of hair. 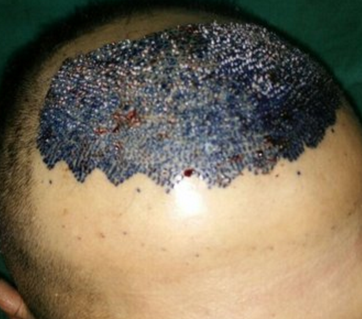 Have You Heard About AAPE For Hair Transplantation Use?
I have high testosterone levels
Shock loss from complications of FUT (photo)
FUT or FUE Hair Transplant for a Diffuse Thinner?
What is my future and how will I manage my hair loss over time?
My Donor Area Is Inflamed and There Are Many Pimples Present 3 Weeks After My FUE (Photo)
Get a virtual consultation with Dr. William Rassman and Dr. Jae Pak for hair loss options. You can learn more by scheduling an appointment.