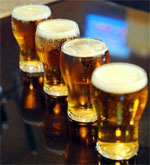 The link has quick paragraphs about a variety of topics, but here’s the relevant info from the page (the bold emphasis added was mine) —

“This study analyzed data on 10,920 men. In a seven-year span, prostate cancer was detected in 2,129 of them, including 564 men with high-grade tumors, which grow and spread quickly. Those who consumed, on average, four or more drinks a day (totaling roughly two ounces or more of pure alcohol) five days a week in the year before diagnosis were more than twice as likely to have developed high-grade prostate cancer as were those who did not drink. No link was found between prostate cancer and more-moderate drinking. Also, among men who had been randomly assigned to take finasteride (Proscar, Propecia) as part of other research to test the drug’s ability to prevent prostate cancer, heavy drinking blocked the effectiveness of the drug.“

This is interesting, but it doesn’t necessarily prove that heavy drinking blocks finasteride effectiveness. Heavy drinking (4+ drinks a day) in itself can cause higher grade cancer. It should go without saying, but heavy drinking is not good in any case. If there is indeed an association with finasteride not working when you drink heavily, I would say it is a good idea to limit your alcohol intake!

Hair Loss Started Again After a Couple Years on Propecia
What Would You Do if Propecia Was Hypothetically Pulled from the Market?
Taking Avodart and Propecia At the Same Time?
Coating on a Proscar Tablet
Long Term Propecia with More Hair Loss
Can I Take Finasteride Temporarily to Protect from Shock Loss?
Get a virtual consultation with Dr. William Rassman and Dr. Jae Pak for hair loss options. You can learn more by scheduling an appointment.