Is it true that by the age of around 33, if no genetic balding pattern has shown much of a sign of appearing it is unlikely that it will appear in a way that will result in major hairloss? 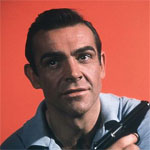 Although this is largely true, it is not a hard fast rule 100% of the time. Sean Connery had a (see update below) in the first of the James Bond movies (when he was in his early 30’s), yet today, his hair loss is quite advanced. His genes kicked in late enough for him to have developed that frame to his face which women find sexy. All of the James Bonds have that perfect, youthful hairline that set many standards for the sexy male image in Hollywood for years.

You need to find out what you have in terms of miniaturization. It would be unlikely that you would bald significantly if: (1) there was no miniaturization of the hair in the front, top or crown at 33, and (2) no one in your family started to bald later than 33. You can check your scalp for miniaturization by mapping it out. If none exists, the probability is that you may never bald, but nothing is ever certain, even for James Bond.

Update: A reader pointed out something I was oblivious to. Sean Connery was bald in his 20s.
From NNDB: “With an especially bad case of male pattern baldness, Connery began losing his hair at the age of 21. Without his toupee, he has been thoroughly bald for decades, except for a small ring of now-gray and thin hair above his ears”

Can I Be Helped Without Having a Hair Transplant?
Can I use Saw Palmetto instead of Propecia to stop my balding?
What is the maximum number of grafts that can be transplanted? (photo)
24 year man old wants a hair transplant at all costs (social and $$)
I Had 3500 Grafts and I Want to Know Is My Donor Area Over-Harvested?
I Had 2 CT Scans in 2 Weeks, Now I'm Losing Hair
Get a virtual consultation with Dr. William Rassman and Dr. Jae Pak for hair loss options. You can learn more by scheduling an appointment.