But although the Chan name has translated to big bucks at the box office, not every product he touches turns to gold. In fact, when news broke last month that an anti- hair-loss shampoo he promoted allegedly contained carcinogens, Chinese cyberspace and media were buzzing about the “Jackie Chan curse.” 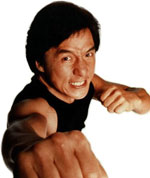 The article isn’t so much about the cancer-risk-increasing hair loss shampoo that actor and martial artist Jackie Chan was putting his stamp of approval on, but more about how he takes just about every paycheck to endorse products that he can get… and he has an unusually high rate of failure.

The shampoo is mentioned again later in the article, though: “Few know whether Chan actually uses the shampoo, called BaWang, which its manufacturer claims keeps hair roots strong and black. BaWang Group stock has tanked since the scandal broke, even though government regulators deemed the product safe.”