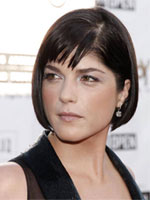 She describes motherhood as ‘amazing’, but Selma Blair has candidly revealed she is experiencing an unwanted side affect. The Cruel Intentions actress, 39, who gave birth to son Arthur Saint four months ago, has revealed she is suffering post-partum hair loss.

‘This is so not glamorous, but it’s true: I need to take longer showers so that I can collect the hair that falls out and throw it away so I don’t clog the drain,’ she tells People magazine.

‘Why do actresses never talk about that?’ She continued: ‘It just started falling out at the three-month mark. And I’m not a girl who likes extensions, so Selma’s going to be bald!’

I’ve written about hair loss after pregnancy before, and it can be a normal occurrence caused by hormonal changes. Obviously, celebrities are not immune to this. There is little that can be done to prevent it, but more info can be found at the American Pregnancy Association.

Does Finasteride Reduce Penis Size?
I've Seen 3 Different Dermatologists with 3 Different Views on My Hair Loss
How does my FUE recipient area look? (photos)
1 year dermaroller and finasteride (photo)
CDC: Forty percent of cancers linked to overweight or obesity
Numbness and Hair Loss in the Back of My Head After an Injury
Get a virtual consultation with Dr. William Rassman and Dr. Jae Pak for hair loss options. You can learn more by scheduling an appointment.