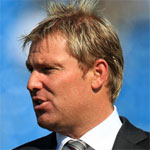 Australian cricket great Shane Warne has found himself at the middle of a storm of controversy surrounding his latest campaign for a hair replacement company.

Advertisements featuring Warne and former England captain Graham Gooch have been banned by an advertising watchdog over their misleading content, reports Eurosport.

Advanced Hair Studio’s advertisements have for years been centred on Warne and Gooch’s strand-by-strand replacement success, but the new ad implied that laser hair treatments produced the same results.

I don’t follow Australian sports so I’m unfamiliar with the spokesmen mentioned, but this seems like another case of a company getting caught attempting to mislead the public about hair loss treatments and the results they can offer. The problem was in the wording of the advertisement, and although these ads were limited to Australia, it shines a small light on false marketing in this industry.

Nizoral Safety?
Reader's Experience with Dermaroller
Do I Need to Wash Off Concealers?
18 Year Old With White Hair
My Fraternal Twin Has Been Losing Hair for Years
Using Mederma on My Hair Transplant Scar
Get a virtual consultation with Dr. William Rassman and Dr. Jae Pak for hair loss options. You can learn more by scheduling an appointment.