Just after Michael Jackson’s sudden death in June last year, rumors started circulating that the late singer was severely emaciated and bald. Although such allegations were frequently shot down, the coroner’s report released on Monday confirms them, and adds new, graphic information.

Sixty-one photographs of the former pop prince were taken prior to and throughout the procedure. According to the report, Jackson’s hair was â€œsparse and connected to a wig.â€

â€œThere is frontal balding and the hair can be described as short and tightly curled,â€ the report claimed. Jackson hair line was tattooed on, as were other facial features. 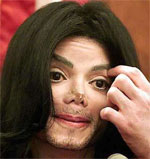 Michael Jackson had 3rd degree and 2nd degree burns to his scalp which, I assume, caused considerable hair loss and scalp loss. It shouldn’t come as a shock to anyone that he had a quite a bit of plastic surgery, but I’ve also heard that he had transplants, although having not been there when they were done or being able to review the results, I am not in a position to determine their value.

If the coroner’s report states that he wore a wig and had his hairline tattooed, it could be that he had the transplants in an area so that the wig could be attached better — or maybe the transplants weren’t as successful as he’d hoped. This is just more speculation, though. The skin of third degree burns does not support transplanted hair grafts. Without examining him, I can not tell for sure what was done or what benefits he received, if any. And since he’s deceased, I’d imagine an exam isn’t going to be a likely possibility.