I am a 34 year old male, what do you think of my hairline?

The hairline should be V-Shaped as this is a typical hairline in a Caucasian male whose hairline has matured (bottom photos). Unfortunately, your surgeon gave you a rounded female hairline by shape,  The leading edge of the hairline should have a transition zone in front of the two and three hair grafts so that there is no visible hairline present (the three last photos), just a zone from the forehead to the thicker hair. You have no such zone. Compare your hairline on the left with the three photos at the bottom of the window. This is a typical mature male hairline which has a better shape to it.  In all of our patients we create a transition zone in the front of the two and three hair grafts as as shown in the three pictures at the bottom which demonstrates a ‘no-hairline hairline’. 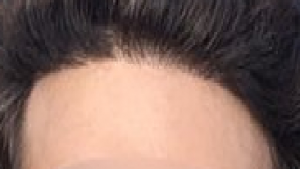 Scalp Psoriasis and Transplants
I Want to Take Steroids!
Spots in My Facial Hair Are Spreading!
6 weeks oral minoxidil and finasteride
I Use Rogaine and Have Scalp Itching.
Patrick Stewart talks about his hair loss (video)
Get a virtual consultation with Dr. William Rassman and Dr. Jae Pak for hair loss options. You can learn more by scheduling an appointment.