On the eve of the Royal Wedding I had a quick question regarding anxiety, stress and hair loss.

Recent photos of Prince William reveal a less than regal mane. Unlike his father or younger brother who seem to have strong hairlines William has thinned out considerably in a rather diffuse pattern.

Throughout his life the young prince has been subjected to ruthless scrutiny by the British press. The obsessive gaze of the public and media only intensified as he matured into a handsome young man. Joining the adolescent cult of celebrity William was conferred a heartthrob status, young women the world over screaming his name and fantasizing about the kind of storybook courtship now lived out by Kate Middleton.

Like his photogenic mother before William became the “face” of the royal family – representing youth, optimism and vitality to a world that questioned the very viability of traditional royalty and it’s place in modern culture.

The weight of this, combined with familial expectations and the untimely passing of his mother Diana, must have placed considerable stress on young Williams emotional state. I can only imagine the anxiety this man has had to endure. Should it come as no surprise then that his hair has thinned? Is Prince Williams current hairline a reflection of years of stress?

Surfing the net one would certainly get that impression. Not only has a BP sized oil slick worth of ink been spilt on Wils wispy locks but the reasons behind his follicular crisis as well. Add to that the litany of sources claiming any amount of stress, worry or anxiety is tantamount to a death sentence for your hairline and the “stress” explanation starts to make perfect sense when looking at Williams situation.

I’m not sure what caused the flaxen haired prince to shed but there is little doubt that he’ll breathe a little easier once the crown becomes requisite attire for public appearances- lets hope he’s not a Norwood 6 by that point!

We’ve actually written about this before a couple times (most recently here).

While stress may have contributed to Prince William’s hair loss, genetics are much more likely to be the reason. There is known genetic hair loss in his family tree, and although his father Prince Charles may have a strong hairline, the top of his scalp is pretty barren. Judging from photos, William’s loss looks similar.

From the video that was streaming on all the news networks last week, it appears that Prince William is fast showing a Norwood class 6 balding pattern. The pattern may even extend to a class 7 pattern (see the big dip in the hair at the back of his head). This is a situation which should have been aggressively treated with Propecia, which might have held the hair on his head when he still had a lot of it. Here he is on his wedding day: 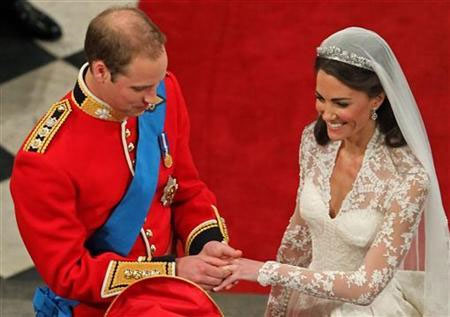