I have seen these unusually low hairlines for a mature male. They are common in children but usually disappear as the male matures.  These hairlines are found more in the Latin and India countries than in Caucasians of European decent. Even for a juvenile hairline, this is low.  Note that there are no temple peaks because they are incorporated into the rounded hairline. 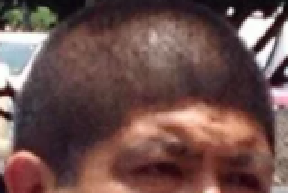