If you have no idea what SMP is then you’re probably not going to find this interesting but I wanted to start a thread chronicling my experience of lightening/removing my scalp micro-pigmentation (hair tattoo). I had my first laser session yesterday.

My hair story is a bit of a long one but I’ll try and explain it as best as I can. Pretty much been bald since my early 20’s, always had a high forehead and it really shook my confidence (and still does unfortunately).

My GP put me on Finasteride and after trying it for a few weeks and dealing with bad sides I stopped it. In my early 20’s I went to see numerous transplant doctors who all told me that I need to wait a few years to see where the balding would end up. They also said that I probably wouldnt be too happy with the outcome of a transplant because of how much hair I had lost and having a so-so doner area. I then started to look for other solutions. I came across Scalp Micropigmentation (hair tattoo) and researched it heavily. This was 5 years ago. I had heard of ‘Tricopigmentation‘ which was branded as a semi permanent SMP option. At the time Milena Lardi in Italy was the best clinician in this field so I travelled to Milan and had 3 sessions done (after shaving my head all over for the first time).

The tricopigmentation gave me a nice shadow but I wanted more so I decided to go down the ‘permanent’ SMP route with a UK company. Again I had 3 sessions but this time it was much darker and overall I was pretty happy with it. I was not as self conscious about my shaved head as I thought it looked like I was shaving out of choice and not out of need. It was high maintenance though as I had to shave everyday and also use alot of anti-shine. Some people noticed and others didn’t. In hindsight Im not sure I was fooling anyone as I do think that many people can spot a ‘too perfect’ hairline. The eyes are naturally drawn to it, which isnt good.

Once I got to my late 20’s I decided to get a transplant to compliment the SMP. Again I researched this for quite sometime and ended up having a 4300 graft hair transplant in Turkey. This gave me texture on the scalp and also massively reduced shine (which I was delighted about) but its way too thin to grow long. The recovery was horrific and dont think id ever get another one. While the idea was that the transplant would compliment the SMP (and vica vearsa), I was left with transplant hair I cant grow very long because it makes the SMP on the scalp stand out like a sore thumb! Furthermore it really made the hairline look even more fake.

Fast forward to 2019 and I was left feeling really self conscious about my head. I do notice when people talk to me they linger just a second too long on the hairline and scalp, plus i do see some people do a double take on the street. In the end I decided my only option was either to live with it (not happening) or get the SMP lasered off (without damaging the hair). After a few months of research I went with a laser removal technician who has alot of experience with SMP.

I had my first session yesterday and so far Im pleased with the results — although it was really f***ing sore. It will take a number of weeks for the fading to happen (it doesnt happen right away) but already I’ve noticed the hairline looks a little more natural and while its still red (it looks worse in photos) I think I will be happier with it gone or faded. Less really is more.The actual hair stands out now rather than the SMP dots.

Happy to answer any questions you guys might have. 3 words of advice if you’re thinking of SMP or lasering it off for that matter:

This man offers good advice. I keep mentioning the idea of a Master Plan and that is something that is critical. Had he found the right doctor at the onset, he would have been able to tackle a hair transplant when and if he wanted one. Here is a man who had the worst balding pattern possible with hair transplants followed by SMP. The photos speak to the result:  https://baldingblog.com/72-year-old-surfer-still-surfing-and-he-has-hair-photo/ 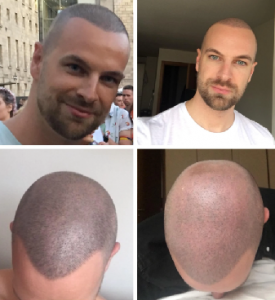 Still another young man with a finasteride story and his advice from Reddit.com
Ovation Cell Therapy Caused Damage to My Transplants
I Only Have Balding in the Front, Can I Have a Hair Transplant?
Can Topical Caffeine Products Promote Hair Growth?
Here is a picture of an unhappy man who had a hair transplant in Turkey (photo)
Minoxidil results in crown 3 months (photo)
Get a virtual consultation with Dr. William Rassman and Dr. Jae Pak for hair loss options. You can learn more by scheduling an appointment.