Normal male hairline progression from a juvenile to a mature one typically occurs between 17 and 29 years of age. The lowest line in the photo below is the hairline this man had when he was about 12 years old. The second line is the hairline that will be his mature hairline if he is not balding. The area behind this second line has miniaturizing hairs and it should be his permanent hair, so this man is clearly developing frontal balding. This process of a maturing hairline might appear like balding to the person impacted by this change, but it is self limited and stops within a few years once the location of the maturing hairline is established. Many of my readers think that the development of a mature hairline is balding (they panic but should not because it is not balding). Performing a miniaturization study at the stage where the maturing hairline is starting to develop would show miniaturization (in only the blue area). In this patient the blue area is completely hair free. Behind the blue area, there should be no miniaturization (not the case in the photos here). I call the entire area we are looking at in the photos, the frontal hairline, not the temples (as so many of my young readers call it). Although the average age of a maturing hairline appears between ages 17 to 29, it could be seen before 17 or after 29.

If this man wanted a hair transplant, I would put him on Propecia (finasteride 1mg) to stabilize his progressive hair loss and then transplant him (about 1300 grafts). One might think that the proposed transplanted area would be easy to see, but he has enough hair to hide any transplant he would get with some creative forward combing style. The balding on the right side is as extensive as the balding on the left side, but the way the hair is styled, it hides the balding well. I would place his hairline just where the blue area starts and give him what he would have had if he was not balding. The entire red area would be filled with transplanted hair.

So just to summarize, these photographs are of a 31 year old patient with early hair loss beyond his mature hairline. The lowest line is the location of his juvenile hairline and the upper is the location of where his mature hairline would be (usually about 1/2 inch above the juvenile hairline in the midline and an inch in the corner of the frontal hairline). I’ve put up the original version and a color-highlighted version to show the areas I’m referring to. The blue section in the colored photos is the area between the juvenile and mature hairline, and the red section is the actual genetic hair loss which has miniaturized hair (behind the mature hairline). Please click the photos to enlarge. 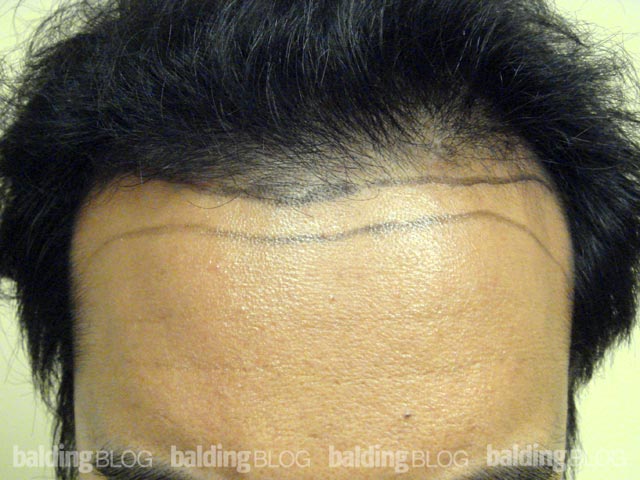 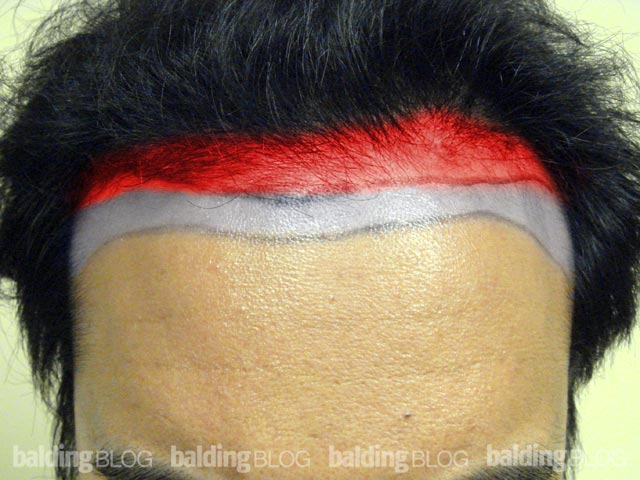 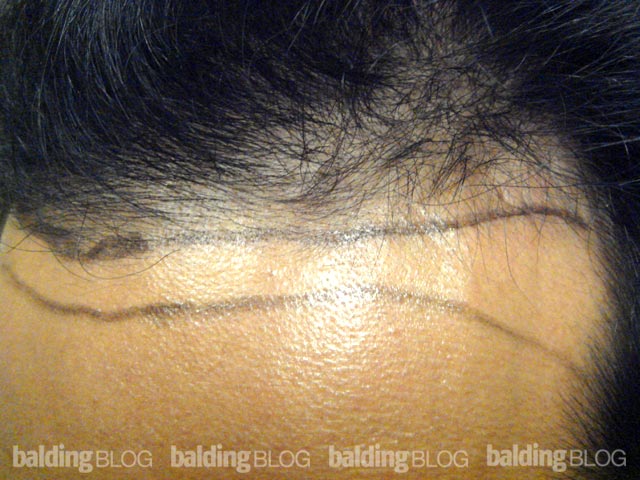 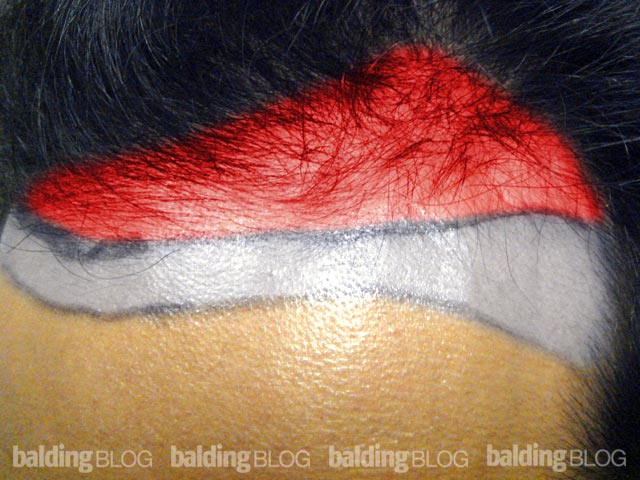 Patient Results Follow-Up - Crown Restoration with 1870 Grafts (with Photos)
A Remarkable Change Made from SMP on a Thinning Scalp (with Photos)
Could Aggressive Styling Cause Uneven Hairline Maturation?
Terrible Scarring from Hair Transplant
My Hairline is Very Asymmetric
Hair Loss On One Side of Head
Get a virtual consultation with Dr. William Rassman and Dr. Jae Pak for hair loss options. You can learn more by scheduling an appointment.