This is a common finding, something that I had with even more balding in the crown. Frontal hair loss and crown hair loss go hand-in-hand.  He has a great hairline now, but at some time in the past, he had terrible pluggy hair transplants.  He was fortunate to have had it repaired (and his white hair hides plugs nicely) so that the old plugs don’t show now.

I was relatively bald in the crown (balder than Mr. Stone). I received 2700 grafts over a 24 year period but I never lost hair in the front. His frontal hairline was clearly moved down and it is now in the normal position after his repair was done. I can tell this because I see the highest crease in his furrowed brow is less than one finger breadth below his hairline. 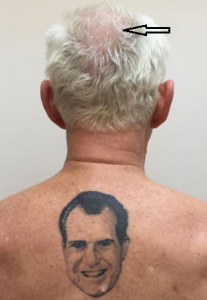 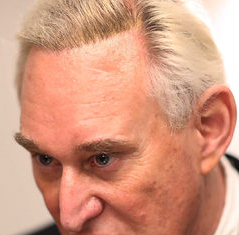 Other Than Propecia And Rogaine...
Hair Loss After Running a High Fever
Bald Spot from Dirty Clippers?
Dutasteride vs. Finasteride, Which Is Better?
Can Toppik Fibers Clog Scalp Pores?
I Grew My Hair Long -- Should Bangs Look Thinner Than the Rest of My Hair?
Get a virtual consultation with Dr. William Rassman and Dr. Jae Pak for hair loss options. You can learn more by scheduling an appointment.