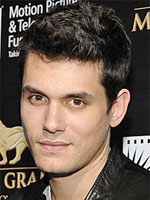 What kind of hairline does John Mayer have. He’s 33, but I seem to have almost the same hairline as him and I’m 21.

Based on the photo you linked to and other photos I’ve seen of singer John Mayer, I’d have to say that this is a normal, non-balding male hairline that he likely had when he was 12 years old. Appears to be a great head of hair!