I got a hold of the operative note from the surgeon, and it was evident that the surgeon took out too much scalp and could not close the wound. The wound measured about 10 inches long and 2 1/2 inches high. When I first saw this patient the wound was infected and draining. He had asked his surgeon why his wound smelled so badly and was told it was normal.  After a few weeks a pus draining on his pillow, he found me and came to my office.  I leveled with him from the start and put together a plan so he knew what would happen to him.  I treated the open wound and the infection over a few months. It finally healed with this terrible looking scar (something I expected and prepared the patient to expect).  Working with Dr. Sheldon Kabaker, we placed a balloon expander in his head under the normal part of the scalp above the wound, stretched the scalp so that it would be able to cover this wound, and then, after 7 weeks of inflating the balloon twice a week in my office, we removed the scar and closed the wound. He looked great once it was completed with a wound that was barely visible. Unfortunately, he was ‘out-of-commission’ from a work perspective for about 5 months. He was a ‘high profile professor’ at a major university in Southern California and despite his education, he didn’t research his surgeon before selecting his initial doctor.

He ended up like he never had anything go wrong in the first place because when we fixed the scar, we also fixed his frontal hair transplant that were messed up by that same surgeon with hair we harvested from the expanded normal scalp. The take home message here is: Make sure that the doctor you select for your hair reconstruction procedure is credentialed and experienced, and knows what he is doing. Strip hair transplants are safe surgeries when done in competent hands. I am a god example of it, as I had three strip surgeries over 25 years  to put hair in my bald crown and I don’t have a detectable scar. 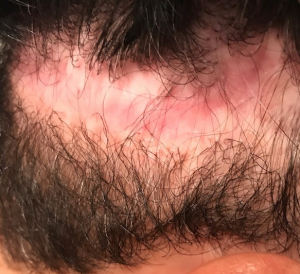 Are Korean Transplant Centers Better for Asian Hair?
The Right Side of My Body Has More Hair Than the Left
Eating Disorder and Female Hair Loss
Finasteride hair is growing slowly
Sudden Hair Loss in 21 Year Old
Hairs That Are Falling Out Are Lighter Than My Normal Hair Is
Get a virtual consultation with Dr. William Rassman and Dr. Jae Pak for hair loss options. You can learn more by scheduling an appointment.