I thought after 8 years,after being in the army and deploying to Mosul, Iraq. Me and my battle buddy were some of the only women to still be losing our hair. I’m now 32 and that happened when i was 23. My hair has almost completely fallen out. I now have to wear wigs probably for the rest of my life and I’m fighting the VA for some kind of acknowledgement and compensation that this is happening to military women after being in Iraq.

I have seen specialist many thing i was exposed to something but don’t know what so they call it Alopecia. But I know its something more, its time this has finally come out. Theres other women with the same problem. So soon the VA will have to pay us for this. Thanks 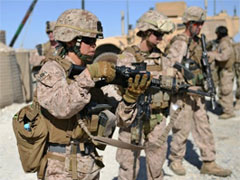 Alopecia is just a generic term for hair loss, so that doesn’t exactly pinpoint what is causing the loss.

I honestly do not know how being in combat would contribute to hair loss for this long. If there is extreme stress, one can argue that could be causing the hair loss… but that would apply both to men and women, and it would be reversible (unless it kick-started a genetic process that would’ve occurred anyway).

Many women who are not in the military or in combat have diffuse hair loss, and sometimes it may be due to genetic causes or to stress. In your case, you’ve been experiencing the loss for 9 years, so I’d expect the stress-induced loss would’ve regrown by now. I’m stumped on this one.

Could Someone Have Mixed Something Caustic and Dumped it On My Hair While I Slept?
Assisted Reproductive Technologies (ART) and Female Hair Loss
Female Hair Loss at 81 Years Old
Lyme Disease, Female Hair Loss
In the News - More Women than Men Suffering Hair Loss in Taiwan?
Treating Alopecia with Acupuncture
Get a virtual consultation with Dr. William Rassman and Dr. Jae Pak for hair loss options. You can learn more by scheduling an appointment.