I am a 20 year old boy I have been noticing hair fall eveyday.  I have read on the website progesterone cream for hair fall. Is this safe? What about PRP 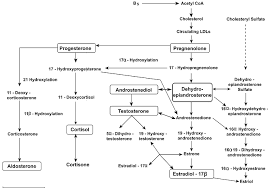 Without going into detailed biochemical / medical logic, there may be an academic reasoning behind the use of progesterone (of how progesterone can counter DHT levels) but it is not a standard treatment for male pattern balding.

There is nothing wrong with doctors promoting off label treatments such as progesterone, PRP, low level laser light therapy as they have a right to practice medicine within the bounds of their Hippocratic Oath. Likewise the consumers (patients) have a right to choose their doctors and treatment options based on their own research and free will. However, it is my opinion that the consumer take a “buyer beware” approach.  For every success story behind these treatments, there are many disappointed consumers who have spent thousands of dollars with no benefit. I may be biased because in my 23+ years in the hair restoration field, I have met with thousands of these disappointed consumers.

Split ends reflect drying and trauma over time. The longer hair ends are the oldest part of the hair shaft and that is why we see the greatest damage at the ends. The trauma is caused by sunlight, blow driers, hot rollers, rubbing too hard, hacking it with dull scissors, back brushing, using a metal comb with fine tines, perming, bleaching or coloring, putting rubber bands around the hair and the use of various hair sprays. The use of good shampoos and conditioners help keep the hair in better shape. Once the cuticle cracks or breaks and the cortex is damaged, only a good hair cut (which removes the damaged hair) will allow you to get the healthy hair look you want. These pictures show the complexity of a hair shaft, with many layers, each of which can be damaged permanently if you don’t take good care of your hair. Look to the right side of the photo and see a still intact hair shaft so you can see if someone had a hair cut and used a good shear to cut this hair a bit shorter, the end will be clean and not irregular. 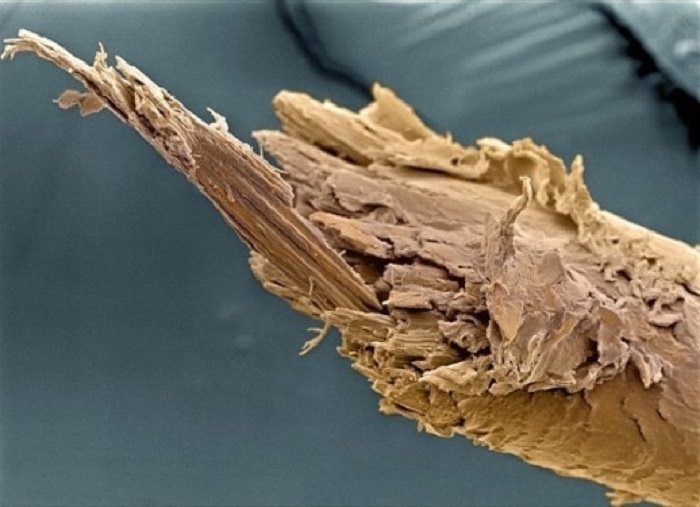 College-aged rugby players taking creatine monohydrate supplementation for three weeks had their Testosterone and DHT measured. The results of these tests indicated a rise in DHT levels when using this supplement in their diet. A rise in DHT levels can accelerate, at least in theory, the hair loss seen in genetically balding patients.

The following is taken from MSN Lifestyle:

Hair grows in a follicle, a bulb-like tube on your scalp. The average head has 100,000 to 150,000 follicles, each operating independently from the others. Hair in its basic, unpigmented state is white. It gets its color from melanin, a pigment that also determines skin color. Two types of melanin, eumelanin (dark brown or black) and phaeo-melanin (reddish yellow), combine to make all the hair colors. One hypothesis for why hair goes grey is that aging slows or stops the hair from accessing the melanin, so it comes out grey, silver, or white instead.

When you’re born, your genes are already hardwired for when and how your hair will turn grey. This includes premature greying—people who grey before age 30 usually do so because it runs in the family. For most of us, greying starts in middle age. Dermatologists go by the 50/50/50 rule of thumb: by age 50, half the population will have at least 50 percent grey hair—although a worldwide survey showed that number was much lower, with only 6 to 23 percent of people half grey by age 50.

In a related matter, race also determines when you’re likely to grey. In general, Caucasians gray in their mid-30s, Asians in their late-30s, and African Americans in their 40s.

This old wives’ tale is a myth. Each follicle can contain only one hair, and plucking it won’t make it able to produce multiple hairs. Furthermore, what you do to one follicle has no effect on the ones around it. That said, excessive plucking isn’t a good idea—it can damage the follicles and even stop hair production in that area altogether.

When President Obama went grey his first term in office, was it stress, age, or a combination of both? Scientists aren’t sure. While some researchers say that your genes alone are responsible for grey hair, others say that there seems to be a connection between greying and stress, just no direct link to prove it. In 2011, a study by Nobel Prize winner Robert Lefkowitz discovered that long-term productions of the body’s fight or flight response—the instinctive ability to mobilize energy in response to a threatening situation—can damage your DNA and cause premature aging, including greying hair.

Another myth is that a major shock will cause your hair to suddenly turn grey. This is sometimes called the Marie Antoinette Syndrome because the French queen’s hair supposedly turned white the night before she was beheaded. But hair, once grown, doesn’t change color, so waking up with a head of white hair isn’t going to happen. Although there is a very rare condition where all of the colored hairs can fall out, leaving only white hairs behind, the simpler answer is that Marie Antoinette probably just took off her wig.

Multiple studies have linked smoking with premature aging, which includes early greying. In 2013, a study found that there is a significant relationship between smoking and grey hair in people under 30. In fact, “smokers were two and half times more prone to develop PHG” or premature hair greying.

All your body hair—chest, nose, pubic, etc.—can turn grey. Body hair tends to grey at a different rate than the hair on your head, which is why some men can have grey beards and brown hair, or vice versa. By the way, dyeing grey pubic hair is a thing.

Scientists in Europe discovered a breakthrough with vitiligo, a disease where skin loses pigment and develops white patches. Like hair, vitiligo is caused by “massive oxidative stress via accumulation of hydrogen peroxide,” causing the skin to bleach itself from the inside out. Researchers have successfully treated the discolored skin and eyelashes of vitiligo patients, which has led some to predict a potential cure for grey hair. But while the idea sounds promising, history is full of tonics and creams claiming to cure grey hair. As far as we know, none of them have worked yet.

A number of times we wrote about the use of the Cold Cap for people who have cancer and did not want to lose their hair during chemotherapy. The stories I followed included a relative of mine who was able to hold on to 80% of her hair under chemotherapy for breast cancer. Another patient held on to his hair with chemotherapy for lung cancer. The value of this technology is absolutely clear and now the FDA has formally cleared the technology for clinical use. It was interesting to hear the stories from some of the patients I followed. Their doctors were somewhat resistant to this technology but because the patients insisted on it, they allow its use in their Chemotherapy Centers. Keeping ones hair during chemotherapy gives dignity to many such patients and helps reduce the stigma associated with these horrible diseases.

There seems to be an impact when obese men have children. The same may apply to women as well, but the study that is referenced here (December 3, 2015 The Scientist by Karen Zusi) states “Obese men have information that can be transferred to children that could potentially affect their eating behavior. And this information can be changed if obese men lose weight,” said Barrès. “Our study doesn’t show what is transmitted to children, but it is likely that something is transmitted and it will change brain development and behavior.”

The study is a “provocative start to asking some really interesting questions,” said Tracy Bale, a neuroscientist at the University of Pennsylvania who studies stress-related epigenetics in mice. “The big picture here is fascinating. It does support the very important potential role of the environment to influence epigenetic marks in dads’ germ cells.”

The concept of a nocebo (a psychogenic effect of a drug) has been discussed in the various studies which focus on the sexual side effects of the drug Propecia (finasteride). The significant ‘hype’ on the internet, has driven many people to the conclusions that if they take this drug, they will become impotent. As doctors, we must discuss potential and known side effects of any drug we prescribe, but what happens following the disclosures, the patients read the internet and find many, many panicky young men who report sexual impotence from taking the drug. Is it real? We don’t know but what we do know is that many studies from other countries have not shown the high sexual side effects reported in the United States. So is this a Nocebo effect resulting from panicky people who read bulletin boards and web sites which focus on this issue.

Dr. Robert Haber, a very respected hair transplant surgeon from Ohio, started to test the concept of a nocebo effect and the general side effects on sex drive and sexual performance using patients who came into his office. This is an early report of his initial findings.

“While I also doubt the existence of PFS, about a year ago I started asking my finasteride patients to complete an anonymous sexual dysfunction survey. For years I frankly addressed the topic at every visit, and my impression was that the incidence of sexual dysfunction in my patients was similar to the 1-2% reported in the studies. I wondered if a more objective survey would reveal anything different. Many of you may recall that I suggested we all gather this data in our offices, but there was little interest.

So I think that when we trust our direct face to face questioning of our patients regarding sexual dysfunction, [we should ask our selves if the patients are fooling themselves] that they are being honest. Apparently, sexual dysfunction is very common overall, so its not at all surprising that patients with this problem will try to blame something, and when there is a target like finasteride, both physician “experts” and lawyers will capitalize on the opportunity.”