Your story seems disturbing and common place. The FDA is supposed to guarantee quality of production even in generics if purchased in the US, but many doctors and patients tell me differently.  Probably best to stick to the known brand names

Hair regressing after 2.5 years of progress from tressless

I am 68 yrs old, very fit, weight lifter, and runner. I have been taking Cialis 60mg usually about 3 to 4 times a week. I also take male enhancement pills.Since I got serious about my sex drive and enjoy it almost daily, I have noticed my hair getting thinner.Could it be the Cialis, or male testosterone enhancements?

You had scalp necrosis, usually the cause of technical issues in instrumentation and judgments made by the doctor. When the recipient sites are made with a larger instrument and/or they are placed too close to each other, especially in the area between the ears in the center of the scalp where your problems are showing, necrosis may occur. This will take sometime to heal. Find a doctor who knows how to manage wound problems. 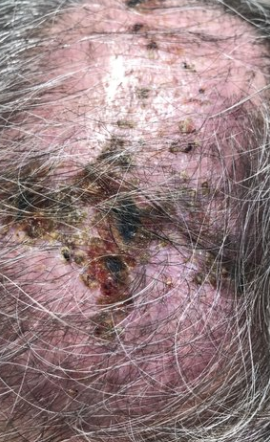 People who regularly eat nuts have a reduced risk of cardiovascular disease (CVD) and coronary heart disease (CHD) when compared to people who rarely or never eat nuts, according to a study published Nov. 13 in the Journal of the American College of Cardiology. This study was done after up to 32 years of follow-up and the researchers assessed the associations of total nut intake and the consumption of individual nuts with CVD, CHD and stroke risk. CVD and CHD included a combination of MI and stroke, but CVD also included all forms of cardiovascular-related death. People who ate one 28-gram serving of nuts at least five times a week cut the risk of cardiovascular disease (CVD) by 14 percent and the risk of coronary heart disease (CHD) by 20 percent when compared to people who rarely or never consumed nuts.

This is a classic picture of an autoimmune disease of the scalp, possibly alopecia areata. You should see a dermatologist 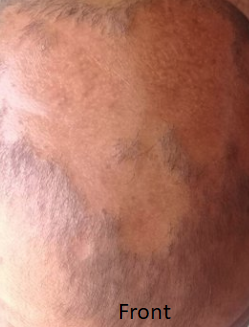 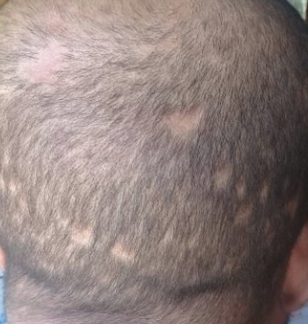 A reader send this posst to me:
Subject: New data on Dr Gho’s stem cell method

Message Body:
In 2012, you suggested the circumstances for making an exhaustive documentation on Dr. Gho’s ‘stem cell method’. The idea was to count the number or percentage of transplanted hairs that actually grew, along with investigating the donor.

Fine, but what then? Who validates it? Who can say whether such an effort is scientific or not. And what about credibility?

A sizeable study of such sort was made very recently, with photos. See it here:
https://www.baldtruthtalk.com/threads/26632-HASCI-analysis-w-photos-results

There is nothing here that looks lkike science to me. This is the problem I have had with Dr. Gho’s research.

Pimples may or may not reflect an infection but a doctor should make that call.  Sometimes the hair spicules react that have been left behind and they cause pimples which usually spontaneously drain on their own, but it can also be an infection so your surgoun should evaluate it. 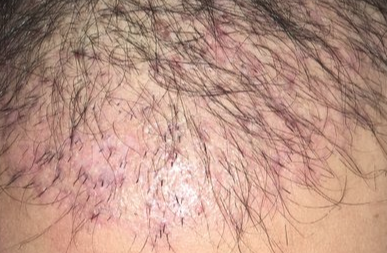 This patient came today at the age of 44. He start to lose hair just 3 years ago, an came because he wanted a hair transplant. His hair is black, medium weight and it has a good wave to it. He is of Italian heritage which gives him a terrific hair character. I measured his hair bulk with the HAIRCHECK instrument and found that he lost 66% of the hair in the front and 55% of his hair in the crown. Considering that is hair is black and his skin is light, he still have good coverage in the front of his head which shows something very important, that you really only need 33% of your hair when the quality is there to have a reasonably full look.  This is the type of look to generally achieve in a single hair transplant in a bald man. 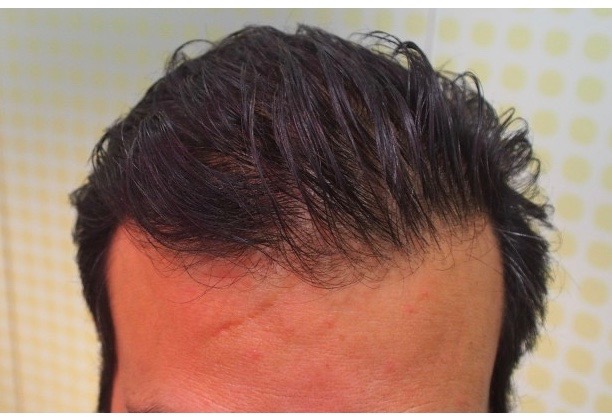 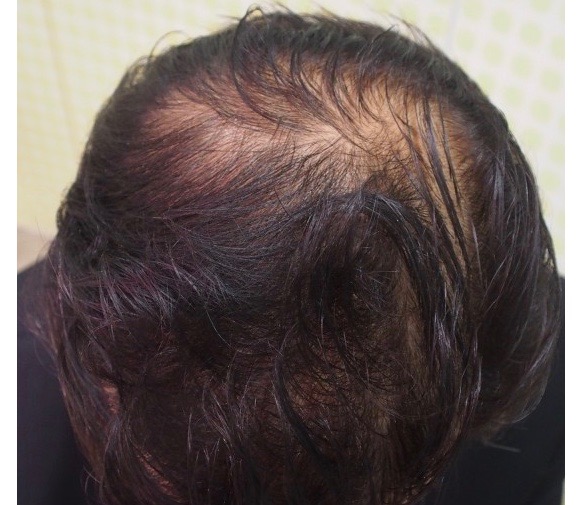 I periodically show photos of patients after their surgeries because so many people are afraid of what they will look like right after the surgery. There are visions or war wounded heads in the minds of many people who think that after their hair transplant, they will announce to the world what they had done and have a full invasion of their privacy. As you can see in these picture, there is nothing much to see and styling can easily hide even the one man on the right who is just one day after the surgery by combing his existing hair forward. The man on the left is one day after surgery and had 1500 FUE grafts and we are showing both the recipient area and the donor area which should be completely undetectable in two more days. The man on the right had 2125 grafts by strip surgery and is 4 days post surgery with some mild pinkness still evident to the camera, not so much on looking at him face on. To see what terrible post-op care looks like, see here (https://baldingblog.com/2017/10/18/now-2-weeks-hair-transplant-cant-go-public-photo/) which is the results of poor washing techniques used immediately after surgery. 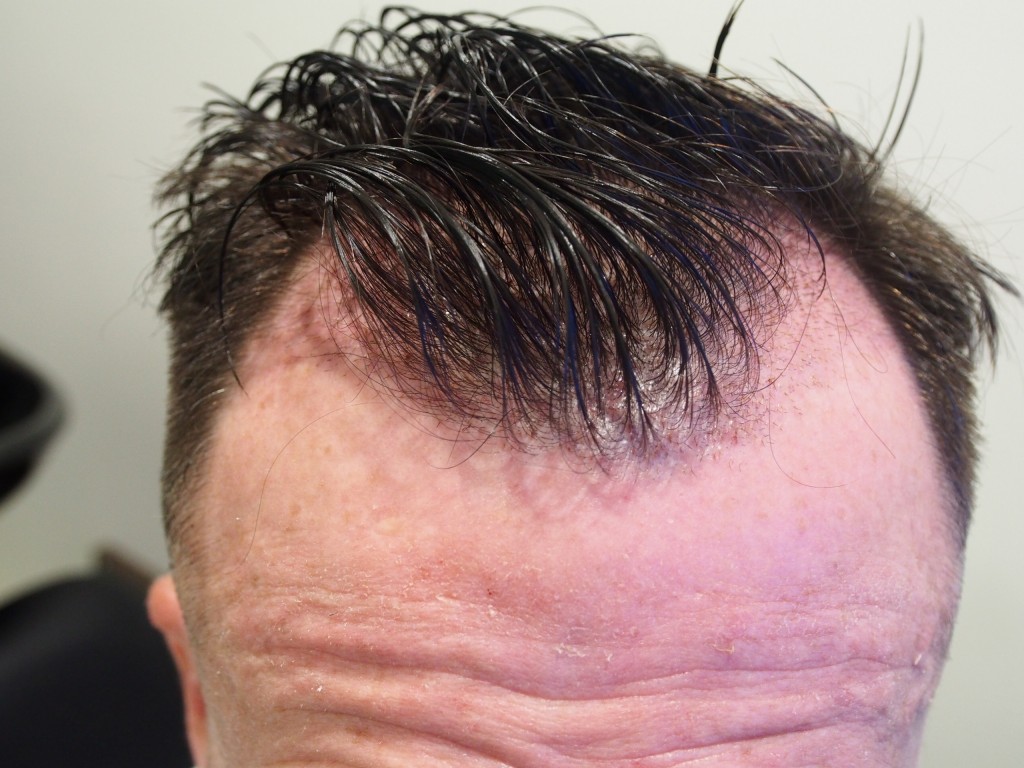 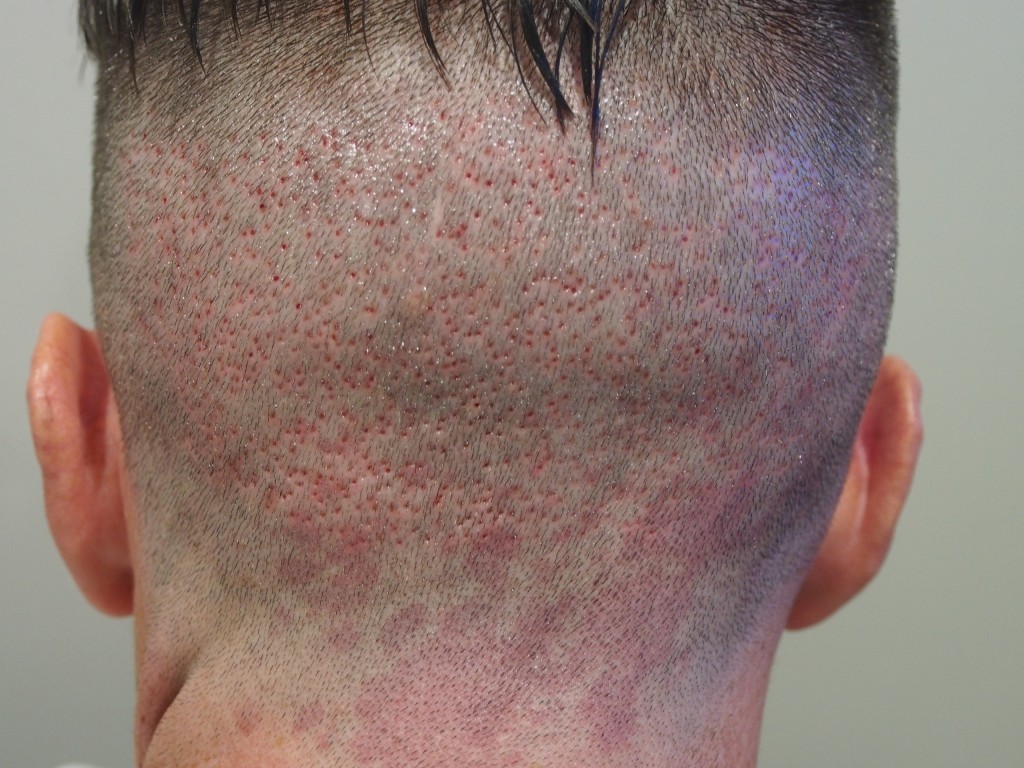 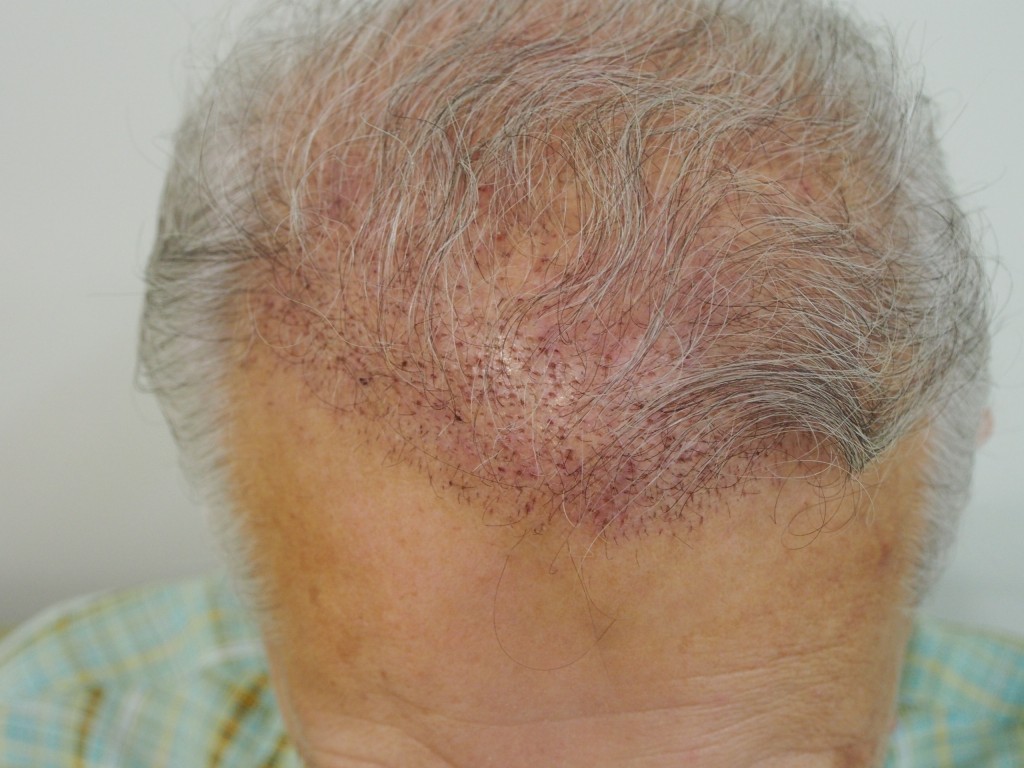 Past three months my hair loss has been really bad. I’ve checked my blood for problems with my thyriod, iron and hormones with a doctor and my blood work turned out ok. It is all okay, so I’m assuming it might be genetic since it is in my family on my father’s side. My mother and sister don’t have this problem.

Female genetic hair loss can usually be seen on the female side of the family (mother, aunt, grandmother, sister) but not always and your male connections with balding really don’t count.  When the diagnosis is not clear, the problem of thinning impacts the social life of the woman. We have been using Scalp Micropigmentation (SMP) for many of these women with great results and although the hair loss may not have been diagnosed, the fullness comes as a result of the SMP process (https://scalpmicropigmentation.com/smp-for-women/)

I am in my mid-30s and I have had three hair transplants to address the thinning but they did not work and I am no better. I also had PRP and that also did not give me any benefit. My doctor told me that he wanted to use drugs like spirinolactone and told me about them, but he also said these drugs did not work well.  What else can I do?

I never treat women like you with hair transplants when there is diffuse thinning present because it does not produce value for you. The diagnosis sounds like typical female genetic balding and if I am correct, your donor area will show significant miniaturization, which always makes the diagnosis for me.  The only treatment is a cosmetic one, the use of scalp micropigmentation (SMP),  See these links which show many women who have been treated with SMP and now have a fuller look. https://scalpmicropigmentation.com/smp-for-women/

Several months ago, my doctor said I might have Peyronies disease because I bent my penis somehow. I finally have an appointment with a urologist next week. After reading your post about penile fibrosis and arguing with my mom that there is no proof Finastride caused my problem, I wanted to ask you how I can tell if Finastride caused my Peyornies or if due to injury? In my story below, I have evidence that it’s due to injury because I was injured. But what role did Finastride play?

My regimen before Peyronies was 1.25 mg Finastride (2x per week) + 5% Minoxidil. As you may remember me, I emailed you about my increased sex drive from low-dose Finastride and you said it has been reported by some of your patients. The week before my penis injury, I ejaculated 4-5x per day for around 1 week. I also felt extreme exhaustion during the second half of that week. The day of my injury, I ejaculated only twice and felt a pinching pain on my penis which signaled me to stop doing what I was doing. I also noticed my penis would not stand up straight when I laid down nor could I maintain a full erection standing up or walking. For the last 5 months, my penis lays on the right side and doesn’t point straight up like it used to.

Later on I noticed that I have a 20-40% degree bend on the bottom shaft of my penis. I’ve lost .5 – 1 inch in length and my girth is smaller. I lose my erection when I stand up very quickly and I can’t maintain it. My penis is also very sensitive to touch.

Around September of this year, I stopped taking Minoxidil and increased my dosage of Finastride to 1.25 mg – M-W-F, then to every other day. I noticed my penis erections because stronger, the strongest they have ever been. This might be coincidence becuse it was 4-5 months after my injury or it could be that I experienced increased libido from a higher dose of Finastride. When I initially started taking Finasteride a few years ago, I had an increased sex drive for several months so that’s why I think Finasteride helped strengthen my erections. However, my penis bend did not go away and my erection was still .5 – 1 inch shorter and smaller in girth.

As you can see doctor, I don’t know how to look for any evidence that Finastride caused my Peyronies, but that doesn’t mean it didn’t play role. Am I wrong?

What study can prove Finastride caused Peyronies? Do you think Finastride helped increase the strength of my erections when I took a higher dose?  Is a low dose of Finastride (0.25mg) enough to cause Peyronies? I am in my early thirties.

There is no evidence connecting the penis abnormalities you spoke about with finasteride or minoxidil. You spoke about an injury to your penis which can cause the bend that is associated with Peyronies disease but no where else did you discuss the timing of your problems with this injury in a time-line fashion. Your visit with the urologist is critical and he should go over this careful history you put together. Finasteride is not a tratment for Peyronies disease but there are treatments for this that the urologist can recommend.

It is ok, but it does not meet my standards. The hairline has many two hair in the leading edge of the hairline which makes it an obvious hair transplant. I would build a transition zone in front of these grafts so that no-hairline hairline exists, meaning that the hairline does not have an abrujpt start as it does in these photos. There is also a small gap on the sides which should be addressed. The hairline on the right is one of our hairlines and as you can see it is much different than the one on the left (your hairline) 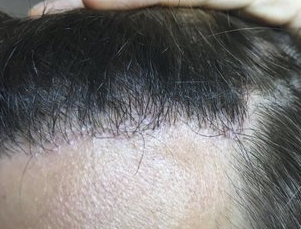 Creatine is a protein powder and by itself, will not cause hair loss; however, some compounds of Creatine have steroids put into them and this will cause hair loss impacting the genetic sensitive hairs that you have on your head. Be sure to read the label which lists contents

This is a photo of hairs that have shed. The hairs take on a J shape which means that the grafts were kinked when then were placed by the surgical team. There is always a question if these grafts will grow out as normally as those without the kink.