This shows that hair loss is clearly not stable over time. This is a remarkable demonstration of hair loss daily with sequential photographs.

The results from the nightly use of minoxidil has been great, but I want to know if it will stay or eventually be lost.

The hair brought on by minoxidil will stay as long as you stay on the drug. When you stop it, then the minoxidil dependent hairs will fall out. Best always to take the exact same view of the photos. 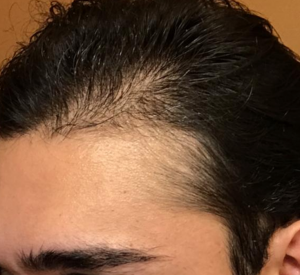 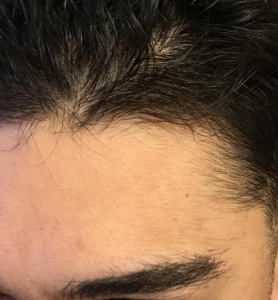 DHT is still in normal range. I thought combination of fin and dut would crush DHT to undetectable levels.

Hair is still the same(no regrowth though).

Why are my hormone levels all normal?

You are having a normal response. That is the reason I don’t get blood tests as it has nothing really to do with the impact of finasteride that you can expect to see.

I went to the dermatologist recently because I’m really worried that I’m starting to lose my hair. I haven’t really noticed any shedding or anything but the hair above my temples seems to be very slightly higher than I remember . Basically the doctor said she couldn’t tell if my hairline was receding or not. When I asked about Finasteride she said that even if i was receding she wouldn’t prescribe me it because my age and some recent studies that showed sexual side effects later in life. I’m honestly sick of worrying about my hair and considering taking it as a preventive measure (both sides of the family have male pattern baldness even though it didn’t affect them until later in there lives 30+) From everything I’d read and seen it seemed like the side effects for this drug are super over blown but after hearing her say that its making me second guess my conclusion. I’m pretty sure If I went to a different doctor I could get them to give me a prescription but I figured I would put something on here first. If I am losing my hair I would like to do something about it before it gets any worse and sitting here going wondering isn’t making me feel any better.

The drug is more effective in most 20 year olds than 30 year old men as a general rule. A lot of that depends upon the hair loss pattern you have inherited. For example, if your father’s pattern is a Class 7 pattern and you are taking after your father from talking with him, I have found that finasteride might slow down the progression to a Class 7 pattern but not stop it; however, if the pattern you are inheriting was not an advanced pattern, then this drug can often slow, stop and possibly reverse it the younger you are. Now with that said, in your situation I would perform a HAIRCHECK test (https://baldingblog.com/haircheck-test-how-it-is-done-video/) to determine if you are in-fact balding before committing a lifetime of taking the drug finasteride because maybe you are not balding. Yearly HAIRCHECK tests will tell you that story and changes in your hairline beyond a mature hairline, could also indicate some genetic factors in you as well. With this approach, you will have developed a Master Plan for your future and with that plan you can stop worrying.

The hair in the donor area, a rim of hair around the back and side of the hair about 3 inches high above the ears, usually lasts your lifetime; however, you can expect to see reductions in hair caliber as you age and in some people, the donor area does undergo extreme thinning and loss of donor density referred to as senile alopecia in elderly people ?

I’m Hispanic, feel like I have a pretty good hairline cause of genes and all that. Id say that all my lifes its been Norwood 0, basically have david schwimmers hairline from friends. Probably a bit more filled up, always hated it cause my hairline was always really crooked and I wanted it to be straight. This past year or so ive noticed that my left side Has straightened a bit more, it’s not receded, still nw0 but my right is more filled up. Isn’t this normal though? Feel like a lot of people here freak out over the slightest recession. It honestly even made me a bit paranoid, I mean I wasn’t expecting my hairline to stay the same way like when I was a kid all my life. I’m nearly 20 and honestly am kinda freaked out browsing here.

Hairlines mature in men and stop at the mature position, which is one finger breadth above the highest crease of the furrowed brow. The shape will be a gentle V shape. Send me photos and I will tell you if you have a maturing hairline. David Schwimmer has some of his juvenile hairline still remaining, and did not undergo a full maturing hairline development as some men do. One of my son’s also kept most of his juvenile hairline.

Say you are 19 with male pattern baldness.  How do you figure out who’s pattern he will be following?

For a 19 year old developing that hairline, it would be critical to get to see a doctor who is an expert in the field of hair restoration as you need to have a Personalized Master Plan developed for your future. I suspect that more hair loss is on the way, faster than you might think so get a good doctor who understands the concept that genetic balding is progressive and that you need a Master Plan, from point of diagnosis, to each year in your life as the progressive nature of hair loss may develop. At the beginning, I would get a HAIRCHECK test (https://baldingblog.com/haircheck-test-how-it-is-done-video/) which I would repeat yearly and adjust treatments appropriate to keep hair on your head. This may in the future lead to a hair transplant if and when the medical treatment but that is not in your immediate future. I educate my patients to put themselves into the shoes of a balding man and ask them to imagine themselves 10 or 20 years older to try to prevent what is shown here: https://baldingblog.com/need-master-plan-think-hair-transplants-photos/.

Make sure that the doctor you choose is well credentialed and experienced. Always ask to meet some of the surgeon’s patients and then, if you meet someone like this, you know to run for the hills. Anyone can tell this is a bad hair transplant. This is a female whose doctor tried to create a rounded female hairline with mult-haired grafts in an even distribution without any sense of the needed quantity, the need for single hairs in an irregular irregular pattern in the frontal area and a shape that is normal appearing. 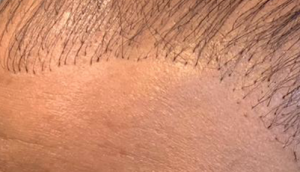 You have an infection of the recipient area with multiple pustules evident on the pictures. You need a surgical drainage of these pustules by your surgeon 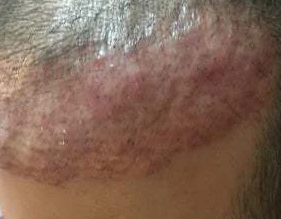 In the picture, you can see a few miniaturized hairs, but not as many as I would want to see, suggesting that the loss may not be easily reversible. Miniaturized hairs can thicken with a drug like finasteride.  We have performed Scalp Micropigmentation on the crown in people like you with great success.  See here: https://scalpmicropigmentation.com/thinning-hair-gallery/ 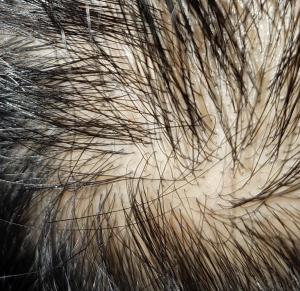 I wanted to say that my wife is 8 months pregnant and I have been on fin for ~ 16 months.

No issue whatsoever! I don’t believe that there are any reports that I have read that suggests that men on finasteride will negatively impact a pregnant woman or the health of the fetus

Yes, beard hair can be used as a donor source; however, the beard hair which is usually taken from below the chin, will be depleted and result in less hair present there. This is a good source for hair provided that you want to shave or not develop a full beard below the chin. The photos shows the result of using the area below the chin as a donor source. Note the thinning of the beard from under the chin which reflects the beard hair that was removed. If this man lets his beard grow longer, the lower density may not show just as it would not show if he shaved daily and didn’t grow out a beard. 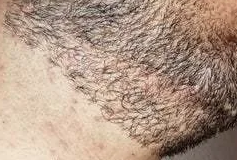 Hair is the highest metabolic organ in the body so when, for example, starvation occurs, the first thing the body does is shut down the hairs so that the person loses hair to conserve energy. 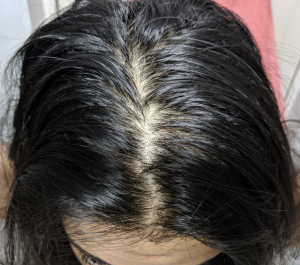 To all of our baldingblog readers, may this season bring you good health and happiness