I grew out my hair a while ago and noticed way more hairs falling out in the shower and kinda freaked out too. It turned out that I was just noticing it more because it was longer 99% sure the answer is no, but wanted to ask just in case. I’ve been on finasteride for almost 10 years now and it’s worked really well, but around a month ago I decided to grow our my hair a little (it’s still pretty short, just longer than before) and I’ve noticed considerably more shedding when washing my hair, on the pillow etc. Is it just coincidence? Am I just noticing it more because it’s longer? Did anyone else experience actually more shedding with longer hair?

When hair is miniaturized, long miniaturized hairs are easier to pull out if you brush or comb roughly.

Alzheimer’s disease may be a risk for older prostate cancer patients given hormone-blocking treatment, a large, U.S. government-funded analysis found.

Previous evidence has been mixed on whether the treatment might be linked with mental decline. But experts say the new results stand out because they’re from a respected national cancer database and the men were tracked for a long time—eight years on average.

Among 154,000 older patients, 13% who received hormone-blocking treatment developed Alzheimer’s, compared with 9% who had other treatment or chose no therapy, the study found.

The risk for dementia from strokes or other causes was higher: It was diagnosed in 22% of those who got hormone-blocking treatment, versus 16% of the other patients.

The results, using perhaps one of the largest and most reliable databases, suggests there truly may be a connection, said Dr. Sumanta Pal, a prostate cancer expert with the American Society of Clinical Oncology. Pal was not involved in the study.

The analysis from University of Pennsylvania researchers was published Friday in JAMA Network Open.

The results aren’t proof but experts say they underscore the importance of discussing potential risks and benefits when choosing cancer treatment.

The researchers analyzed data from a National Cancer Institute database of cancer cases and treatment and covers almost 30% of the U.S. population. The study focused on men in their 70s, on average, with local or advanced prostate cancer diagnosed between 1996 and 2003. They were followed until 2013. Medicare records indicated dementia or Alzheimer’s diagnosis.

Hormone-blocking treatment can include testes removal to reduce levels of testosterone, which fuels prostate cancer growth. But it more typically involves periodic drug injections or implants that achieve the same result.

Most U.S. men who receive this treatment are in their 70s or older. It’s sometimes used in men who might not be healthy enough to tolerate other cancer treatments including surgery to remove the prostate and radiation.

While the study doesn’t prove that the treatment causes dementia, she said, it is important to tell patients “because of the potential impact of Alzheimer’s disease or dementia on the quality of life of patients and their family.” She was not involved in the study.

© 2019 The Associated Press. All rights reserved

For the scientists in our group who are interested in how the drug works, finasteride is a competitive inhibitor to DHT and the effectiveness of this is shown in the graph below. Note that the inhibition works even at lower doses.   The degree of inhibition at the AR receptor does not correlate directly with the effectiveness of the dose based on clinical finding; however it is nevertheless close to the degree of inhibition. 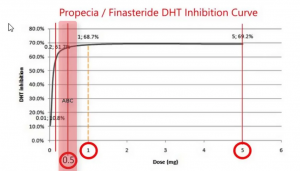 I gave him two choices of hairlines and he selected the lower one and that is what he got. 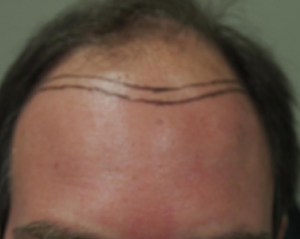 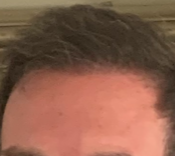 I’ve heard of new “DPI” hair transplants that are supposed to look even more natural. Does anybody have any opinions? I heard the biggest advantage is the density you can achieve with a low graft count. I just want to reconstruct my temples (I am 25 and they are just starting to go). If I could do this with only 500 or so grafts so I have more when I am older that would be fantastic.

DPI? When a new name is invented without a real new validated technology, it is a marketing ploy. There is no such thing as: ” advantage is the density you can achieve with a low graft count” other than to get your money. Use your brain and read my blogs at: https://baldingblog.com/ to educate yourself.

This is an easy pattern for an expert’s eye to predict as outlined (in the right photo I marked up the left photo). The Norwood Class 5A pattern has a narrow crown component and when this man completes his balding pattern he will be bald back to the top of his crown (indicated on the photo). What is significant is the persistent forelock which has hair that is stronger than the surrounding hair. These forelocks tend to run in families and if this man keeps his forelock until he is 35, it is likely he could maintain it in the long term.  Looking back at his family patterns, he should see if his father or grandfathers had this persistent juvenile hairline into older ages.  From a transplant perpective, when this man’s balding becomes significant enough to require a hair transplant, having an “A” pattern is good news because almost everyone with the ‘A’ type patterns always have enough hair to get a full head of hair restored. 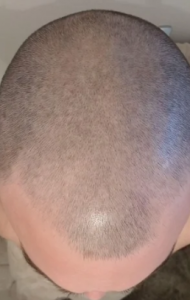 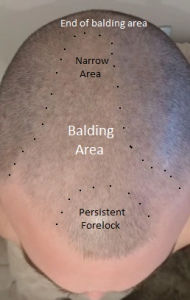 So I started taking finastaride on Saturday the 22nd of June. And here is what I have taken.  Saturday 0.25mg Sunday missed a pill (hurt my leg playing football and was in hospital for scans) Monday 0.25 Tuesday 0.25 Wednesday 0.25

So here’s my question. I have taken in total 1mg of finastaride and last (Thursday)I have started to have an irrated nipple to the point where it feels like it has been chaffing on my T-shirt’s( I was wearing a rough embroider shirt) I’ve had no other sides (for now) and I am well aware that this could be in my head and I am a massive over thinker in these types of situations but the things that are swaying me to thinking gyno is:

So my question is, do you guys believe this could be gyno? My doctor recommended to stop for 2 weeks and see what happens to the symptoms.  I’m just unsure how fast gyno can happen??  I really don’t want to lose my hair so I’m debating whether taking a SERM with finastaride??

After a single dose or a limited dose, I doubt that the gynecomastia would get worse. Considering your history, I would think that you are too much focused on this side effect and .what you are experiencing may be a nocebo effect. Seeing your doctor is a good idea.

This man posted his photos on Reddit.com, and although it looks ok, it still looks like a wig. It will eventually pull out all of the hair from the glues used to attached it to the scalp, and the overall cost will eventually be more than a hair transplant 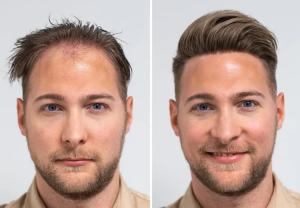 I’m considering to get a procedure done and was wondering if there are difference between FUE procedures or are they all about the same?  What are some important questions to ask when deciding on a doctor besides ‘how long have you been doing this’?

FUEs vary between doctors because each doctor uses a different type of hand ‘punch’ and smaller ones (up to a limit), leave smaller, less detectable scars. The problem with FUE is that the number of grafts removed safely is absolutely related to the density of the hair in the back of the head. The higher the donor hair density, the more FUE grafts can be taken, while in a person with a low donor density (a typical Asian, Indian or middle easterner) might have a normal lower hair density than a typical Caucasian from Northern Europe.  This rule also applied to the Hair Mass Index of the hair, the higher the index, the more FUE grafts can be safely removed.  If a doctor takes too many hair grafts out, then you can get balding in the back and sides of your head from the FUE (see here: https://baldingblog.com/collection-victim-photos-internet-harvested-depleted-donor-areas/ ) which is something that the doctors don’t have to live with, you do. Worst, 90% of the people doing the FUEs in Turkey are not doctor so that certainly with an non-professional person doing your surgery may be VERY common in people receiving surgery in Turkey.

I was the person who pioneered the FUE in 2002 when I published the first paper and presented it at the first meeting all in the same month. I gave out 600 DVDs showing what an FUE looked like. Then, within a week, doctors from all over the world started doing it and doing it very poorly. My video was only 2 minutes long and it was not made to teach the doctors all of the nuances of the FUE. Even today, many doctors don’t understand it well. I, with my partner Dr. Pak, also invented the robot that does the FUE holding two patents for the technology. We licensed it to the company that made the ARTAS robot. Here is our original article that opened up the FUE business: https://newhair.com/wp-content/uploads/2018/11/mp-2002-fue.pdf

You must find a doctor who is skilled in the process and you can tell by asking to meet some of his patients and then look carefully at the donor area for the type of scarring that is evident (my link above shows it). Ask your doctor for his measurement of your original donor density and his assessment of how many grafts he believes you can support in your lifetime. Too many doctors take out too many grafts with FUE causing the problems I demonstrated above.

It took years to control the infection on him. It came from dirty cutting sheers. 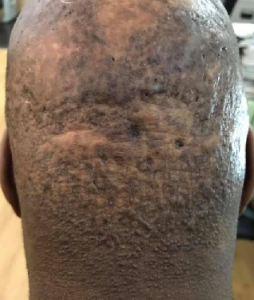 Washing your hair daily is never a problem–just be gentle with it. When you are too vigorous, you pull out the miniaturized hairs very easily.

I am a 21 year old female suffering from traction alopecia. Unfortunately, due to my work I have to wear my hair in tight ponytails. I believe this has caused me to lose hair around my temples. What are my options ?

I would like to know if it is present on the other side as well. Sometimes a condition called Triangular Alopecia can cause a pattern of hair loss like this, but not as large. As your history is consistent with traction as a cause, then a hair transplant is the perfect answer, regardless of the cause.

If the doctor or his staff were not using a microscope, they would have missed the extra hairs in this graft, possibly killing it by cutting it out rather than leaving it in the graft when the hair transplant was done. This is probably a new anagen hair developing. 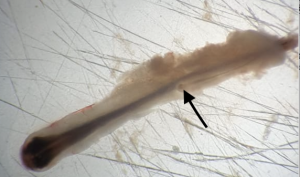