I’m 22, Male, and have had a ton of stress over the past four or so years. I’ve been slowly losing hair (noticed a bit of loss about two or three years ago I think) on the right side and now a small bit is gone on the left side. Is it possible that this is stress related but NOT indicative of MPB? I mean is is possible that this isn’t just speeding up MPB that I’d get later on regardless? And if it grows back a bit or stops falling, do I need to worry that it is MPB which will continue? Or can I move on and assume whatever was lost, whether it regrows or not, was just due to stress and that there won’t be any more loss? I really need help please. Thanks so much!

As this is very important to you, you should see a doctor like me who can make the diagnosis and using tools such as the HAIRCHECK test (https://baldingblog.com/haircheck-test-how-it-is-done-video/) and try to predict what your future might look like. Then based upon that assessment, a good doctor will build a Master Plan for you to follow. The key is to keep your hair and with today’s medications and hair transplant technology, it is something that you should want for yourself.

No, the number of harvestable grafts are fixed for your lifetime and depend upon your original donor density which the doctor can measure. That is why we are careful about what we take from the donor area when we do a hair transplant. As the limit for a typical Caucasian is about 7,500 grafts, then as this number is drawn down, it can’t be replaced and eventually there is no donor hair left. This is my concern in Turkey where they will take out 6000 grafts in a single session, leaving almost nothing left for future balding (which is almost a certainty) and they do it all with FUE, but most people can’t handle more than 3,750 FUE grafts before they start looking bald in the back of their head (see: https://baldingblog.com/collection-victim-photos-internet-harvested-depleted-donor-areas/.

Interesting article. I don’t understand the metabolic pathway suggested in the article. I will research this.

I have been taking Dutasteride for a month now, but saw no improvement in my hair: the bald spot on my crown continued to grow. I tested my DHT again 2 days ago: 1110.8 pg/ml.

Of course. Increasing the DHT levels has nothing to do with the effectiveness of either finasteride or dutasteride and that is why I never get DHT levels when I prescribe finasteride.

because i always see posts on hear of people saying they loss density on fin cuz of the shed and it didnt get better is this possible because im worried that may happen, Ive seen other ppl say its impossible to lose hair on it.

In my practice, I have never seen finasteride cause hair loss but I have seen genetic hair loss move rapidly evolve while a person is on finasteride.

Conclusions of article:  Minoxidil is a common medication prescribed for treating hair loss-related problems. It provides remarkable benefits to patients with hair disorders. To date, the FDA has approved minoxidil only for AGA. However, minoxidil is used off-label for treating several hair disorders as well as increasing body hair growth. Although topical minoxidil is considered an effective and safe treatment option for various hair disorders, additional evidence-based data are needed for some applications.

Other mention: Salicylate and aspirin can inhibit sulfotransferase. A recent study showed that the follicular enzymatic activity decreased following 14 days of low-dose aspirin use. Thus, prior or concomitant use of aspirin decreases the clinical response to topical minoxidil.

If finasteride doesn’t reverse frontal hair loss, will is slow it down or stop it?

I have seen some patients get good results in the frontal area (not common), more are younger (closer to 20 rather than 30 y/o).  Yes it often slows or stops the recession.

I keep trying to find online stories of people who were not responders to fin switching to dut and at least maintaining but throughout my googling I cannot find a single one. Quite the opposite actually, people keep saying it did nothing.

I switched to dut after not responding to fin three weeks ago. Does anyone know any stories of fin non responders responding to dut as I’m pretty demotivated by finding one possible success story and finding 20 other failures from my position.

Also if anyone did have success how long did it take?

You increase the risk of sexual side effects because dutasteride blocks the DHT receptors about 90% vs finasteride at 70%. Also there are sterility reports from dutasteride. Be careful about this decision

LONDON (Reuters) – Omega-3 fish oil supplements can improve attention in children with attention deficit hyperactivity disorder (ADHD) just as much as drug treatments, but only in those whose blood levels of omega-3 are low, trial results showed on Wednesday.

Researchers in Britain and Taiwan who conducted the placebo-controlled trial with 92 children said their findings suggest a “personalized medicine” approach should be adopted in this and other psychiatric conditions.

“The omega-3 supplements only worked in children that had lower levels of EPA (eicosapentaenoic acid) in their blood, as if the intervention was replenishing a lack of this important nutrient,” said Carmine Pariante, a professor at the Institute of Psychiatry, Psychology & Neuroscience at King’s College London who co-led the trial.

He said the work sets a precedent for other nutritional interventions and could be the start of “bringing the benefits of ‘personalized psychiatry’ to children with ADHD.”

ADHD is a common brain condition that affects an estimated 3% to 7% of people worldwide. Symptoms can include problems with attention and impulsivity that cause difficulties in academic, work and personal relationships.

In this study, published in the journal Translational Psychiatry, researchers from King’s and from the China Medical University in Taiwan conducted a randomized controlled trial with 92 children aged 6 to 18 with ADHD.

They were given either high doses of the omega-3 fatty acid EPA, or a placebo, for 12 weeks.

Results showed that children with the lowest blood levels of EPA showed improvements in focussed attention and vigilance after taking the omega-3 supplements.

Standard treatments for children with ADHD include stimulants such as Ritalin, known generically as methylphenidate, which can improve levels of concentration and focus in ADHD patients.

Pariante’s team said that while the amount of improvement in attention and vigilance from methylphenidate is generally 0.22 to 0.42, the effect seen in children with low levels of EPA in the trial was larger – at 0.89 for focused attention and 0.83 for vigilance.

But in children with normal EPA levels, omega-3 supplements made no improvement, and in those with high EPA, the supplements had negative effects on impulsivity symptoms.

The scientists warned parents should not give their children fish oil supplements without checking first with a doctor, and stressed that omega-3 levels can be checked with a blood test.

One of the great unsubstantiated claims that when treating high cholesterol blood levels with cholesterol lowering drug that these drugs caused premature dementia or a generalized reduction of congnition (memory function). A new study in 1000 people in Australia reported here:

Australian investigators followed more than 1000 older adults over a 6-year period, assessing memory and global cognition at 2-year intervals. They used MRI to evaluate total brain volume, as well as the volumes of the hippocampus and parahippocampus.

They found no difference in the rate of decline in memory or global cognition between statin users and nonusers, nor did they find differences in brain volume changes.

This is important because it addresses concerns about the safety of Statin Drug from various sources.

Finasteride 1 mg is considered to be the standard treatment method for male androgenetic alopecia (AGA). However, there have only been a few studies investigating its long term efficacy. Moreover, its effect on various types of AGA remains unknown. In this study, the authors investigated the 5 year efficacy of finasteride 1 mg in Korean men with AGA and analyzed the changes in hair growth according to the distribution of hair loss. The medical records of male AGA patients who were treated with oral finasteride for a period of at least 5 years at two university hospitals were retrospectively reviewed. Patients’ photographs were evaluated using the basic and specific (BASP) classification and investigator’s global assessment. Of the total 126 patients, 108 (85.7%) showed improvement after 5 years of treatment. According to the BASP classification, hair loss of the anterior hair line (basic type), vertex (V type), and frontal area (F type) was improved in 44.4%, 89.7% and 61.2% of patients, respectively. The V type showed a more rapid and steady improvement compared with the other types. Progression of alopecia after peak improvement was seen in 10.3% of cases of the V type, 16.2% of the F type and 0% of the basic type. In conclusion, finasteride 1 mg showed a sustainable effect for at least 5 years in Korean male AGA patients. The exact time points showing signs of first clinical improvement and sustainability were different depending on the type of alopecia 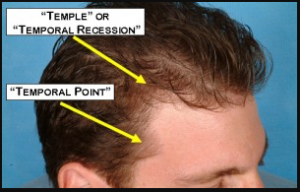 Usually, side effects appear in the first month

The donor area in the average Caucasian male has ~12,500 Follicular Units of which possibly up to 60% can be taken for hair transplants. For FUE without becoming over-harvested, about half of this amount (30% or 3,750 grafts) can be taken with FUE to be safe. The thickness of the hair shaft (fine, medium or coarse) alter this number (lowers if for fine hair and increases it for coarse hair). The question to ask, is how much hair do I have to leave behind to keep my donor area LOOKING healthy and full enough not to reveal that I was transplanted.