Well you should never have had a transplant that young especially with this much hair loss. Any good doctor would never do this because the potential for you to keep going bald is too high. In other words, you only have 6000-7000 transplantable grafts total. You may not have grafts to cover future loss later. The sad fact is the best age for a hair transplant is in the 30s. Now you may be faced with shaving your head and if you have fut, you will have a scar. It’s possible you can have scar revision if it’s bad. You can also have what’s basically a hair tattoo where they take a shaved head and place tiny dots to simulate hair follicles as well as hide the scar. You have other options but not everyone has the correct head or hair for a transplant.

I generally tell patients to get a HAIRCHECK test to find out what their pattern would be and to consider taking finasteride to prevent shock loss.  I suspect this man was too young, never had a HAIRCHECK test and was not taking finasteride to prevent shock loss. He paid a very hefty price for his decision to do a hair transplant without adequate research.

I am beginning to notice a trend of accelerated hair loss during certain times of the year, particularly in the winter months. I’m from western Pennsylvania and as such we experience all four seasons, with winters fluctuating from brutal to mild all in the same season. I’ve noticed that my hair looks much more thicker and darker during the summer months , but has the months turn colder I begin to notice distinct hair loss on the the sides and top of my head. The density of my hair in these areas is noticeably less, as you can see bits and pieces of my scalp through my hair, especially on the sides of my head. My guess for the cause of this rapid hair loss during the winter month is due to the lack of sun that provide vitamin D and being pent up in the house resulting in minimal exercise. Another thing I noticed is during the last stretch of winter, is that my mood is quite negative (seasonal depression); perhaps resulting in even more hair loss.

Has anyone else noticed a similar pattern during the winter months? And if so, how did you deal with this issue?  I have began taking fin (4 months in with the fin) and vitamin D3 supplements as well as doing my best to watch my diet and exercise outside despite the freezing cold. I’m wondering if there anything else I can add to routine to lessen the affects of this kind of hair loss?

Humans have asynchronous hair cycling while other furry animals have synchronous hair cycling that is tied to seasonal changes. Certainly vitamin D deficiencies will cause hair loss and we get good doses in summer if you are out in the sun, but we usually don’t fluctuate on our Vitamin D levels by the month unless you live in very norther climates where there is no or minimal daylight in the winters.  We know that people who live in norther Scandinavia, for example, develop Vitatmin D deficiencies not infrequently and this may impact their hair. Taking oral Vitamin D may solve this problem for this population of men and women.

They say a picture is worth 1000 words. Clearly finasteride has had a remarkable impact on this young man. The dose of topical finasteride was subsidized with the oral finasteride so it is difficult to tell which drug did the most for him.  I will prescribe Topical finasteride 2.5% with 2% minoxidil in solution and this should be more predictable without the oral finasteride required. I hope what we are seeing is not the results of a darker photograph. Comparisons of photos should always be done with similar lighting conditions. 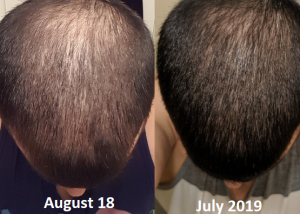 How do you know this? Any evidence you can provide? Anecdotally on Reddit and hair forums – you read hundreds of posts of people “sprouting new mini hairs” (ie at the hairline), after starting finasteride, minoxidil, and more recently – dermarolling. These hairs may not necessarily be fully miniaturized – but they certainly are thinner than other terminal hairs.

I have seen patients with significant miniaturization placed on finasteride and then upon re-examining them, I saw less miniaturization as hair seem to become thicker in the same areas I examined.

I have always grown a full mustache but mine started disappearing little by little. I only grow one side and the other is as smooth as a babies bottom. what sucks so much about is that I have to keep up with shaving one side so you cant see it growing in and looks like I forgot a side lol. (what’s going on) any anwsers

A mustache transplant can solve this problem, something we do frequently

The pattern shown in this photo shows that the grafts were removed with FUE in two stripes and will cause a see-through donor area when the hair grows out particularly if he cuts his hair short. The lower FUE harvest seems to come from the neck which is not permanent hair. 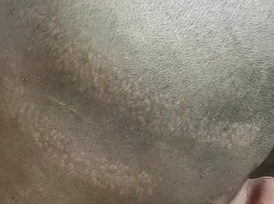 Did my dermatologist prescribe Finasteride too liberally ?  Context : 27 y/o. Father and his 4 brothers have full heads of hair. Mother’s side : 3 out of 4 bald uncles. They were bald in their early twenties.  I went to the derm two weeks ago. He didn’t look closely at me or do a hair count. He was like “yep, looks like MPB alright” and gave me a prescription for Fin (1mg). First pic is Aug 2017. Rest of the pics are from the last 2-3 months.

I would have performed a HAIRCHECK and a miniaturization study before committing you to a lifetime of finasteride. Too many men go on the drug not knowing for sure if they are balding. I like to make the diagnosis with instruments first, then use these instruments to establish a ‘metric’ which I can follow yearly to see the effectiveness of the finasteride yearly.  That is the value I believe doctors should add to this treatment process.

This is called sublingual dosing of a drug.  For some medications, slow action is better than fast action, especially for drugs that drop the blood pressure or have heart effects that are supposed to be taken as a pill.  See this article here:  http://journalofpharmaceuticalresearch.org/index.php/kpc/article/viewFile/118766/81984

They say a picture is worth a 1000 words. He is one of the best surgeons in Brazil and he learned SMP here at our office. In addition to learning, he was one of our patients and we repaired some very old work of the plug era hair transplants. The SMP he had done wiped out all of the scars he had from the old surgeries.

I know how it works chemically. I mean in practice. I’ve been on finasteride for 4.5 months now and haven’t noticed any regrowth and my hair is starting to shed quite a bit again. I obsess over this every day and it’s destroyed my confidence. My hair is about an inch long right now so i think it would be difficult to notice subtle regrowth anyway. Most of the hair fall I’ve been experiencing lately has been pretty short hairs. Maybe about a centimeter on average. I know finasteride takes time to strengthen miniaturized hair follicles but I guess my question is, is it common for hair to start growing back and then just fall right back out? I’m wondering if maybe it can take a couple of growth cycles for the hair to actually be strengthened enough to grow out and stay without falling. Anyone have any insight?

Hair cycling between growth and rest, is mediated by an enzyme called 5 Alpha-Reductase which is present in small amounts and converts testosterone to dihydrotestosterone (DHT). Testosterone affects lean body tissue, muscle size, muscle strength, and sexual function in men. In men who are genetically predisposed to develop androgenetic alopecia (AGA; male pattern hair loss), endogenous androgens alter scalp hair follicles, resulting in production of vellus-like, miniaturised hair, rather than cosmetically significant terminal (normal, full bodied) hair. This change leads to a progressive decline in visible scalp hair density, readily perceived by the patient as thinning and, eventually, baldness. The benefit to finasteride occur over from 6 months to 2 years.

You should not know that you are taking finasteride when you are on it in terms of how your body functions normally.

Look at the picture and you decide! 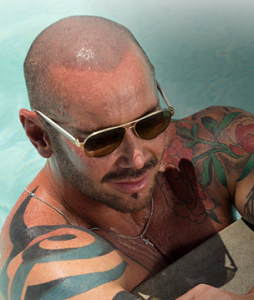 This is an excellent review of the causes and the progression history of genetic balding in the male.  Rod Sinclair is an Icon in this field and is senior author on this article.

This is  very exciting article which shows that it can significantly improve communication and social skills in autistic adults. 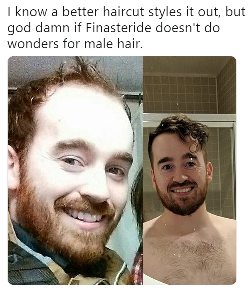