This patient had a hairline lowering procedure. The scar is a complication of this type of surgery, especially when the wound is placed under tension.  To avoid this, a low tension closure is critical but this often limits how much the hairline can be lowered. A hair transplant lowering surgeon, of course, does not have this problem.  To correct this, a hair transplant should be done in front of the hairline to bury the scar so it can’t be seen. There seems to be enough room for hair grafts to make such a surgery successful. IF the scar still shows after the hair transplant, Scalp Micopigmentation will work well to camouflage it. 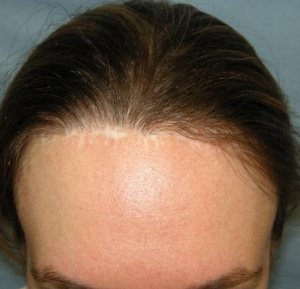 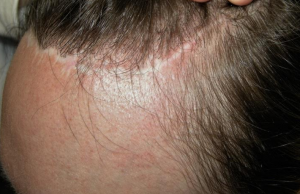 It is not normal. It could be from finasteride or many other causes are possible but if you just started the drug and developed testicular pain, the two are probably linked. See your physician who prescribed you the finasteride and then decisions should be made about continuing the drug if it is the cause of the testicular pain.

Remarkable results from finasteride in just 4.5 months. This young man must have been very sensitive to finasteride 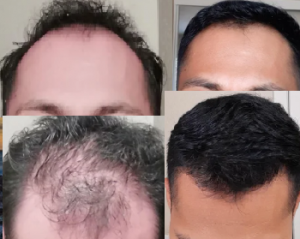 Excellent responder to the minoxidil and finasteride combination. Keep it up and stay on it and you will only get better. 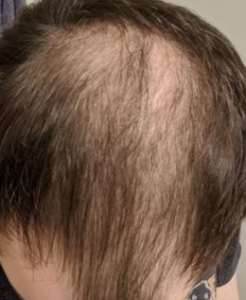 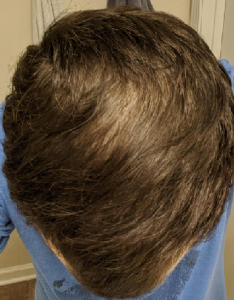 These are miniaturized hairs that will almost certainly respond to (1) finasteride (2) minoxidil and even (3) microneedling. 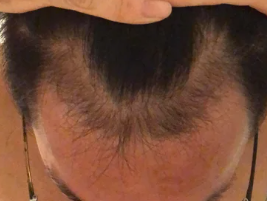 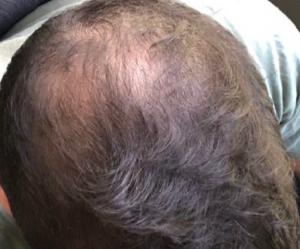 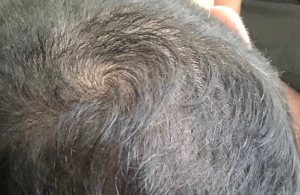 I’m sure my hair loss is mpb but it’s going so fast, like a few days ago I could comb my hair to hide receding hairline now I can’t. All the hair falling is long healthy looking hair, not small or thin. Can extreme stress be causing mor than normal hair loss? If I can get back to normal state can it be reversed partially at least? My father also have hair loss but his started at 35 and is not too bad, at 55 he is Norwood 5. I’m 28 and Norwood 3 at the moment. I’m anxious since I was 14. Lots of stress at 22-23 when my hair started to fall but wasn’t noticeable until 25-26 Then it went too fast. My stress level also progressed with time I’m in 24/7 extreme stress now.

In men who have genetic balding, stress often brings it on earlier if the stress is significant in your life. You will know it is genetic because the hair loss will appear in a pattern typical of male patterned hair loss. You might want to set up a free telephone consultation with me by calling 800-newhair or contact info@newhair.com

I have these bumps on my recipient area. I had the surgery 6 weeks ago and these bumps seem to stick around. I asked my doctor about it and he said not to worry, they would go away. What do you think?

This is classic cobblestonning, something we used to see a great deal when the grafts were larger. These grafts were not placed flush with the skin so they healed elevated with this cobbling just like a cobble stoned street of the old days. This may or many not go away. There is nothing you can do about this. I never allow my grafts to be placed above the surface of the skin so I never get cobbling. The arrow on the picture on the left, shows elevation of the grafts from the flat forehead, a classic cobbling effect. 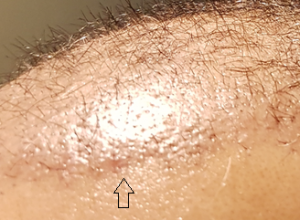 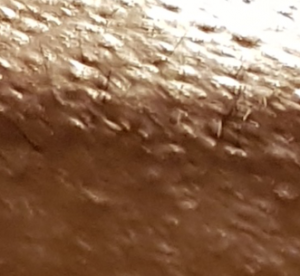 from the reports, the answer is yes! I suspect that you would have had to have experienced sexual side effects for some time for this to happen to you. There is still doubt in the medical community that this syndrome may not be real.  I have no opinion one way or the other

We have reported on this before many times, see here: https://baldingblog.com/?s=balding+heart+disease

I’ve been a lurker for awhile and have learned a lot of helpful info from this community. I’ve been dealing with baldness since around high school, when I noticed my hairline receding. I experimented with Rogaine and Propecia and was able to keep density and restore my hairline somewhat, but out of fear of impotence and such I retired the meds and have my hopes on one day getting a hair transplant.

Now more than 10 years later, my hairloss has progressed and I’ve been forced to buzz my head constantly with more hairline recession and thinning at the crown. I’m not sure when I’ll be ready to make the hair transplant jump, but have been recently looking more into SMP, since I already keep a buzzcut.

My question is, if I were to go ahead and get SMP done, while still hoping to get a hair transplant in the future as hair thinning continues, will the SMP procedure complicate a future transplant or ruin candidacy? Is it worth to spend money on both? Ideally would love to have a head full of hair again.

You can do Scalp Micropigmentation (SMP) and then down the road, if you need a hair transplant you can still do it. Be sure that you find a medical group that does both so that they have experience with it like we do. Your strategy sounds good to me. Look at our website: https://scalpmicropigmentation.com/

This is an extremely complete assessment of the long term use of this controversial drug. The writer concludes that adding minoxidil and microneedling will increase the benefit and I agree with that conclusion.

Hi everyone I previously made a post about the ultimate hair loss protocol, the post consisted of the best treatments of hair loss and mainly debunking some finasteride risks. However today I will be discussing finasteride importance in people’s protocol, dosages, and long term efficiency. Before I get into the niddy griddy lets get one quick point out of the way

As you can see above is the 5 year study of finasteride 1mg a day consisting of 4 different groups. Some interesting things to notice

Now based on the people on finasteride for all 5 years, we can use simple math to predict long term efficiency of finasteride, which can also be back up with a study that I will demonstrate after.

So we will take the highest finasteride hair count, which is after one year on average. Based on multiple studies I took the average hair count after one year to be (80) on 1mg per day, also using this number to be conservative. We know the hair count change from baseline after 5 years was (38), So using these two points including the years we can create a formula to calculate the efficiency of finasteride. Again note this is just an estimate

So based on this formula using the data above after 10 years we can estimate that the average man on only finasteride will be -14.5 below the baseline. Again you may be higher, while some are lower, that is just the average. Now compare this to the placebo group which the information found online the average loss after a year from baseline is -15 (imagine 10 years on finasteride is equivalent to one-year placebo for the average man….crazy), now after 5 years the placebo group was -239 below baseline, so again let’s do some calculations.

That means after 10 years of no finasteride the average hair count is a staggering -519 below the baseline.

The group starting finasteride after one year of being in the placebo group.

For this group after 10 years we have a hair count of – 53.5, this is equivalent to about two years without finasteride in the placebo group.

Again above is considered a worst-case scenario since two studies have been published on finasteride, with the duration of finasteride use being 10 years, demonstrating that finasteride either increased or stabilized hair count in 86-91% of patients. So the calculation above should really be giving you the worst case result, which is still great, showing finasteride being great for stabilizing hair loss for many years. Also consider this is just finasteride, no minoxidil, dermarolling, alfatradiol, RU, and CB.

Fuck the dosage curve. yes, the one I am showing you below,

This graph tells me absolutely nothing, just how much DHT is being inhibited, great, but what you and I care about is hair growth, stabilization, cost, and side effect free profile.

Based on this graph it should make no sense why lower dosages work for some people, in terms of side effects being alleviated.

Based on hair count after one year

1mg inhibits exactly the same amount of DHT as 5 mg yet 1 mg is 80-90% (Based on a couple of studies). 5mg is shown to have a higher side effect profile compared to 1 mg, even though they inhibit the same amount of DHT. 0.2 mg daily is 80% as effective a 1 mg, yet it only inhibits 3-7% less DHT. So again DHT levels do not seem to matter in terms of side effects and efficiency, or they are not entirely correlated. So many people on the site are wondering what the most cost-effective dose as well as side effect free profile. Well for starters we want to at least take finasteride on a regular basis meaning every day, every other day, or 3 x a week. So assuming 1 mg is the gold standard lets calculate using the info of 0.2 vs 1 mg hair count. We will use the total weekly amount of each so 7 mg a week vs 1.4 mg per week.

So if you take 1 mg (3x a week) that would mean your hair count would be 65, then there is 1.25mg 3 times a week will give you a hair count is 68. So you get the point, there are diminishing terms. In technical-scientific terms no 3 x 1mg a week is not as good a 1mg daily, however the difference is minimal, and if lowering your dosage allows you to take finasteride side effect free, which seems to be dose-dependent, please lower your dosage, knowing that finasteride is used for stabilization and that using things like minoxidil and derma rolling should be used for major hair regrowth.

Hope you enjoyed the post. Have a good day

The actual text with good graphics can be found here:  https://www.reddit.com/r/tressless/comments/hyv2fg/information_on_finasteride_dosage_and_long_term/

Take a look at this photo in the post here: https://baldingblog.com/what-does-dupa-diffuse-unpatterned-alpopecia-look-like/ . This man has DUPA and as you can see there is extensive miniaturization in the zoomed-in photo. I need to see such a photo of you to give you an answer to your question.