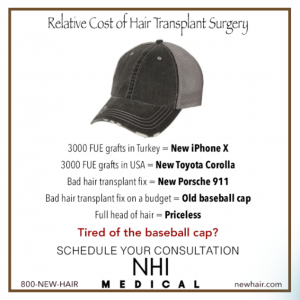 Because the actual work takes often many people, the work load is distributed to technicians; however, the doctor must do the following: (1) give the anesthetic, (2) do all of the surgical planning including the design and distribution of the grafts, (3) make determinations on the size of the strip (if a strip surgery is one) or the instruments that are appropriate if FUE is done, (4) Perform the strip surgery or the FUE which includes the extraction of either the strip or the FUE coring component, (5) Orchestrate the individual’s roles, control quality of graft management among the staff who prepare the grafts and may insert them into sites made by the surgeon (site making must be done by the surgeon)? 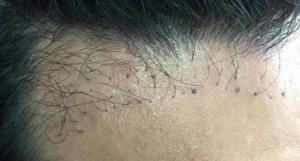 Your examination showed that your hair is fine (measuring 40 micron thickness), has a salt and pepper color, is straight from what I can see, and your scalp laxity (the looseness of your scalp) is very good.  I spent some time explaining that the area of balding you have now, was originally covered by 75,000 hairs. With the hair remaining around the back and sides of your head, only about half of it can be moved to cover this large bald area.  I can move possibly between 10,000-15,000 hairs in two surgeries to cover an area that originally was covered by 75,000 hairs, so that the new density will be 1/5th or the original at best. As your hair is fine, the value of each hair is less than if it would have been coarser and does not cover very well without a substantial numbers which you will not get from the two surgeries I am recommending for you. I showed you many pictures today including someone with fine hair who had front and top coverage and expected that this is what you would look like, and you told me you would be satisfied with this look. I also discussed that when the hair is fine, longer hair gives you better coverage so when it starts to grow in after the hair transplant, you will make determinations at that time as to what length looks best.
I recommended at least two surgical sessions with as many grafts as possible and as are safe.  The first session will get out between 2500-3000 grafts and the second session will be another 2500-3000 grafts (each graft contains about 2 hairs).  If after the second surgery has grown in (about 6-8 months after), then we will make a decision about how full it is, if it meets your goals and if you want it to appear fuller, either a third hair transplant or Scalp Micropgimentation (http://www.scalpmicropigmentation.com) to color in the background), would be the next and possibly last step in the process.
I told him that I was confident that we would achieve the goals he and I defined if he followed the plan I outlined for him.

With no vellus hairs seen, this is a clear indication that there is some scalp and hair disease present (Frontal Fibrosing Alopecia, or Lichen planopilaris which typically presents as smooth white patches of scalp hair loss. No hair follicle openings can be seen in the areas of hair loss. At the edges of these patches, there may be scale and redness around each hair follicle. Hairs can be easily pulled out.  This condition is a contra-indication for a hair transplant. A scalp biopsy will help make the diagnosis.

If you are 19, neither the surgeon nor you know what is going to be your final hair loss pattern so decisions made at 19, mean (1) possibly using up your donor bank of hair, (2) having a hair transplant every year as your balding pattern progresses which is does in many young men.  When a man reaches the age of 25, their hair loss pattern is often evident and knowing this allows the surgeon to make a Master Plan not only for the hair loss you have now, but for the future prediction of your hair loss from the diagnosis of your future loss pattern. Donor grafts must be saved for the future loss predicted by the surgeon at 25 years of age?

I am 25 years old suffering from hair loss . I had a FUE Hair transplantation of 2000 grafts for the hair line but the results was not full and I believe now that I need more hair in the top and the vertex area. Can I do another hair transplant?

I still have a full crown hair wise but you can clearly see the skin, the hairs are transparent, they have basically no pigmentation and that’s why it looks very thinning. What is the underlying science behind loss of pigmentation in AA? I couldn’t find any studies on the web

Miniaturized hairs often lose pigment and color because the hair follicle production is impaired and continues to get worse as the process progresses. As the hairs get thinner and thinner, they contain less pigment and eventually become clear (see-through) as the pigment cells in these hairs die.  These hairs also often stop growing before eventually falling out completely.

Hi doctor, if I want to drop finasteride for cognitive reasons, is it better to slowly ween off of it, or drop it cold turkey? I’m 4 months in. I’m doing proscar 1.25mg every other day.

Just stop it! If you had benefits, you will see the benefits disappear in up to the first 3 months

The company that submits the application has to be motivated to prove safety and effectiveness on a large, statistical sample of men with hair loss. The manufacturer decided not to do this.

This is certainly interesting and suggests that peppermint oil work in mice. Does that mean it will work on humans.  Let me know if you try it and it works for you.

my dad went completely bald, so i know my future. im curious as to whats the highest (average donor) capacity of grafts someone could extract, and how much grafts are needed to make the head appear full. I know that Caucasian people roughly have 100.000 hairs, i cant understand how some fue results with around 10.000 grafts show great results whereas others with 10.000 grafts look like shit basically. is it even worth it to go for a transplant if i know im going to be completely bald? cause then i end up with some hair on my top, cant wear the sides shorts cause of scars?

You need to find a doctor who can follow you and develop a Master Plan with you for your future hair loss, assuming that you will have it. You may not follow your father’s hair loss pattern but the earlier your find out, the better. Our blog site is loaded with information to answer your questions: Two recommended posts are here: 1- https://baldingblog.com/need-master-plan-think-hair-transplants-photos/ 2- https://newhair.com/resources/#tab-id-4

I would be happy to work with you, especially if you can get to Southern California.

Many men who have frontal hair loss will also develop crown loss. This is called a Class 3 Vertex presentation of hair loss. If you are under 25, you might find that it will progress further.

If i remove testicles do i gain my hair back and where do they do such operations?  Knowing that hair transplant is expensive , with average results and success rate i am trying to know my options

This was done back in the 1920s when identical twins we compared by a psychiatrist. One was a patient in the hospital who had his testicles removed and a full head of hair, the other was his identical twin brother who visited and was bald. When the psychiatrist saw the bald twin on a visit to see his brother, he gave his full headed identical twin a single shot of testosterone and the bald twin lost all of his hair. That should answer your question. Removing your testicles is not a good option and will not restore your hair.

This patient received over 4000 FUE grafts and now has a depleted and permanently damaged donor area. He must wait this out and probably get Scalp Micropigmentation to manage it as I expect this this will be permanent. 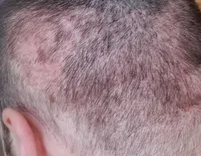