I was wondering if someone who started with DUPA can later on develop male pattern baldness in there life?  i have a second question if i may? In those DUPA patients who react to finasteride, was their progression moving faster than who did not react to finasteride?

We really don’t understand DUPA but yes, I have seen people with genetic balding who have DUPA, so the reverse is highly possible.

You must get your surgeon to measure your donor density  (https://newhair.com/resources/#tab-id-4) and with that number, you will know, using the chart here:   how to calculate your limit for FUE.  The photo below is what you want to avoid by protecting yourself as I described in the link I supplied. 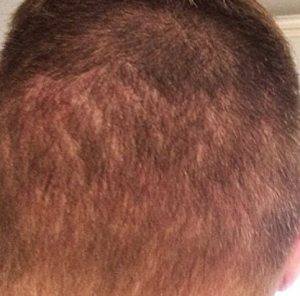 What does this mean? It means that both numbers have to be normal to reduce your risk of heart attacks and stroke. Your doctor can regulate it!

Dr. Rassman covers many of the subject discussed on Reddit including a new breakthrough that is in the works that should actually grow hair. This breakthrough is not yet commercially available but Dr. Rassman may still yet use it on some selected patients willing to volunteer as subjects for studying this new approach to hair loss.

One of my son’s went on Propecia (Finasteride) and found an increased sex drive as you reported. The water semen is common. I think that this side effect (increased sex drive) is more common than most people think; however, we focus more on those individuals who have a reduced sex drive and this is the complaint we hear about.

Thinking about a hair transplant, but I have some doubts about terminology: what is the difference between a graft, a follicle and a hair?

Hairs are the product of the body and is created in the manufacturing apparatus called a hair follicle. Hair follicles grow in groups and each group is called a follicular unit (often called grafts when moved in hair transplants).

As a results of three trials, the American Heart Association and the American College of Cardiology (AHA/ACC) issued updated aspirin recommendations in March. They advise against routine aspirin use in people older than 70 years and those with increased bleeding risk. Routine aspirin may be considered in adults 40 to 70 years of age at high risk for CV disease with no increased bleeding risk, they state. “People may think that because it’s over the counter and it’s been called ‘the wonder drug’ for 30 years it must be pretty safe,” Susan Smyth, MD, PhD, told theheart.org | Medscape Cardiology. “Now we have to work to get the word out to talk to your doctor first before starting aspirin,” said Smyth, Gill Heart and Vascular Institute, University of Kentucky, Lexington, who is not associated with the current analysis. “As physicians, we are reasonably good at implementing guideline-directed medical therapy when we know something works. What we don’t do a very good job at is de-implementing when we learn that it maybe doesn’t work so well. De-implementation is much harder,” she said. However, she said, it’s equally important to remember that for patients at high risk and those with known coronary disease, aspirin remains a key component of lowering the risk of having a first or second heart attack or stroke. (Text taken from Medscape)

Been on fin two months. Zero sides so far. Baby hair sprouting out, how long before those hair become thicker.

Hair grows out at about 1/2 inch per month and it often takes a few months for finasteride to kick in. I tell patients to wait a full year to see the value and benefits.

Do you lend any credence to the symptom of “brain fog” while on finasteride? I can’t find much documentation of it in the studies I’ve read.

Yes, I believe that I heard enough of these complaints on various forums to believe that it probably has credence. We do not know finasteride does have brain effects that have been documented.

After years of studying the twists and turns of hormone replacement therapy among women, Montreal-based epidemiologist Christel Renoux, MD, PhD, shifted her focus to its use in aging men — a path that’s proving no less controversial. “There is a passionate debate around testosterone replacement therapy; you have strong, strong believers it is really having a benefit and others say the benefit is modest and not worth the risk. You can see that it is really dividing even the scientific community,” she told theheart.org | Medscape Cardiology. Following the publication of two articles linking testosterone replacement therapy with an increased risk for myocardial infarction (MI) and stroke, the US Food and Drug Administration and Health Canada issued warnings about using testosterone products for age-related low testosterone and required a warning on product labels. The European Medicines Agency, however, found no consistent evidence for such risks.

Prescribing patterns appear equally conflicted, with one recent study showing testosterone prescriptions plunging in 2013 after publications of the cardiovascular safety concerns, while another report found spending on testosterone nearly quadrupled from $108 million in 2007 to $402 million in 2016. Rates of hypogonadism, however, have remained stable, suggesting that aging but otherwise healthy men with low testosterone may be turning to testosterone replacement therapy (TRT) as an elixir for aging and dwindling sexual function. “We are at the early stage of the debate. We need much more work to clearly delineate is there a place, possibly, for testosterone replacement therapy and in which clinical scenario and at which age,” said Renoux, from Jewish General Hospital and McGill University, both in Montreal, Canada.

Renoux and colleagues’ latest work provides no easy answers, despite a large cohort of 15,401 men, aged 45 years or older (mean 60.4 years), diagnosed with low testosterone without evidence of hypogonadotropic or testicular disease in the UK Clinical Practice Research Datalink database between 1995 and 2017. Most patients received testosterone gels or creams (56.8%) and 33.6% received injections. The results show a 21% increased risk for the composite of MI and ischemic stroke/transient ischemic attack (TIA) in current TRT users vs nonusers after adjusting for more than 20 potential confounders (hazard ratio [HR], 1.21; 95% confidence interval [CI], 1.00 – 1.46). This corresponds to an adjusted risk difference of 2.4 events per 1000 persons per year, the authors reported July 18 in the American Journal of Medicine.

MI and stroke risk was highest in the first 6 months to 2 years of continuous use and mostly driven by an increased risk among men aged 45 to 59 years. Risk was also increased in men with and without prior cardiovascular disease (CVD), but the results did not reach statistical significance. Surprisingly, current TRT use was associated with a lower risk for all-cause mortality (HR, 0.64; 95% CI, 0.52 – 0.78) and past use with an increased risk when compared with nonuse (HR, 1.72; 95% CI, 1.21 – 2.45). “It’s difficult to reconcile on one hand an increased risk of cardiovascular disease, which is one of the leading causes of mortality in older men, and at the same time finding a strong predictive effect on all-cause mortality,” Renoux said.  (Text taken from Medscape)

We hold Open House Events every month in our Los Angeles where former patients come in to discuss their experience with prospective patients. I asked them yesterday if they would be willing to allow me to photograph their hairlines. These men said yes. All of these hairlines were transplanted by either Dr. Rassman or Dr. Pak. As you can see, they are each different but they are all normal looking and don’t look like their hair was transplanted but the hairlines were directed by the patient so what you see is individual differences between patients individual tastes. Scroll down to see each patient as they are separated from each other in this post. If you come to one of our Open House events, you can meet and speak to such men.

This patient had his entire head in a Class 6 pattern transplanted including all of the hairline you see.

This patient had his entire Class 4A frontal pattern transplanted including all of the hairline you see as well as the side hairline.

This man has a Class 6 pattern of balding transplanting his entire front, top and the upper part of his crown. The hairline is a completely transplanted hairline.

This patient just had a surgery 4 weeks earlier (some in the front and most in the crown) and the hair has already started growing. He previously had 2000 grafts for the frontal hairline and frontal area

This man had his entire head transplanted. He was the first patient to get FUE in North America.

Once the hair has been removed with FUE, the hair never grows back. Your donor area looks over-harvested 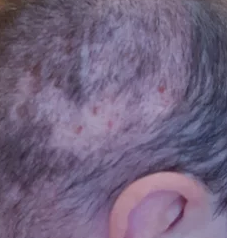 A graft  calculator (there are many) doesn’t take into account such things as hair mass index, a critical element for determining how many grafts one needs for a given bald area. To make my point clearer, image a fine hair (equal of a 1 by 1 piece of wood) or a 4 by 4 piece of wood). The 4 by 4 would have four times the mass of the 1 by 1. Then assume that the analogy is that a 1 by 1 is equal of a fine hair, but a 4 by 4 is equal to a coarse hair. The number of hairs (or grafts which contain hair) required will be significantly different so it is not just a number calculation as these Graft Calculators show. Then there is the ‘ART’ that allows an experienced surgeon to blend the numbers and the hair mass of the hairs and grafts into a plan. At the time this plan is built, the surgeon must take into account the donor supply (is it high or low). High density people with coarse her can do more to cover their balding area than fine hair low density people. To make maters even more complicated, imagine that you continue to bald even after the hair transplant.  Most people are somewhere in-between low and high densities and that is why an experienced hair transplant surgeon is critical to the entire process. I am not easily replaced by a calculator.

Trichotillomania (TTM), also known as hair pulling disorder, is a mental disorder characterised by a long term urge that results in the pulling out of one’s hair.[2][4] This occurs to such a degree that hair losscan be seen.[2] Efforts to stop pulling hair typically fail.[1] Hair removal may occur anywhere; however, the head and around the eyes are most common.[1] The hair pulling is to such a degree that it results in distress.[1]

The disorder may run in families.[1] It occurs more commonly in those with obsessive compulsive disorder.[1] Episodes of pulling may be triggered by anxiety.[1] People usually acknowledge that they pull their hair.[1] On examination broken hairs may be seen.[1] Other conditions that may present similarly include body dysmorphic disorder, however in that condition people remove hair to try to improve what they see as a problem in how they look.[1] 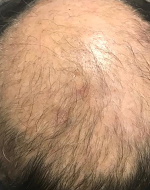