Remember 90+% of the clinics in Turkey don’t have a doctor or if they do, the doctor is not doing the surgery or the anesthesia. Make sure that the one you picked doesn’t fall into that situation. If anything should go wrong and there is no competent doctor in surgery, you could die!  It happened in California a while back.

If you read this post: https://baldingblog.com/22-year-old-received-a-hair-transplant-of-2800-grafts-from-reddit/ you will understand why I believe that men under 25, with a hair loss pattern that is not evident, should not undergo a hair transplant. I just spoke to a 21 year old man from Europe who went to Turkey and had 4000 FUE grafts. I am certain that he has depleted his donor supply, he lost all of his original hair in the Class 6 pattern and with the 4000 grafts (about 7000 hairs) he covered an area that was probably originally covered by 70,000 hairs. That is easy math for anyone to understand. A good hair transplant surgeon understands the math and the art and can blend the two to produce a great result, but that surgeon must know where the patient’s balding pattern is going before implementing a Master Plan (the Plan I discuss all of the time) to guarantee good results. Getting a hair transplant in Turkey, as this patient today did at 21 years of age, just produced more complications for his future. The doctor was greedy and was after his money and he wanted to believe that this doctor in Turkey (may not even have been a doctor who did the surgery) could fix his problem.

I would like to ask you a question. I’ve been dealing with hairloss for some time now. Been on minoxidil for 8 years. Never took finasteride. Begin 2019, my hairloss accelerated and I decided to try Saw Palmetto capsules and Pygeum. I took this for a year. Nothing special to report, until a couple weeks ago: some ball ache. I decided to quit. That was 4 days ago, give or take. Since yesterday however, I have developed full ED. Can’t get it up for the life of me. It looks noticeably smaller. It feels weird, cold and as if I need to go to the bathroom all the time. Are you familiar with side effects like this? I’m freaking out a bit about all the PFS stories. Full disclosure: I’m also on Wellbutrin for 2 months now.

What can I do. I’ve consulted my GP and decided to quit all pills and wait it out. But kind of losing my mind here. Are these sides permanent?

I have never heard of anyone with such a report. Seeing your doctor and stopping the medications is the best thing I can recommend and then wait it out. If it is induced by the Saw Palmetto, it should go away in a few weeks.

The pictures speak for themselves, early growth benefits 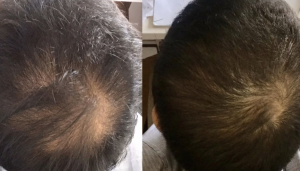 If I use the dermaroller and minoxidil without finasteride and get my hair back, will it stick around after I stop the treatment?

Everything you use to keep your hair (minoxidil and dermarolling) must be continued to keep it. The same is true for finasteride. The hair that is brought back, still has its genetic code for apoptosis so if you stop treating it, it will die off.

My hair has always been extremely thin. My mom and sister have the same hair and we all look almost bald when we shower. Now I’m 21 and I feel like I’m losing hair from my temple and I feel like it looks thinner. But the thing is I never see hair anywhere on my pillow, while styling my hair, in the wash basin etc. Even during shower I only lose like 10-20 hairs.

Do you always see hair falling out when you’re balding? I don’t even see hair when I comb or run my hands through it.

I feel like I’m in denial about my hairloss.

If you have a good hair shaft thickness (not fine but medium weight hair or better) you can lose over 50% of your hair without seeing it come out. 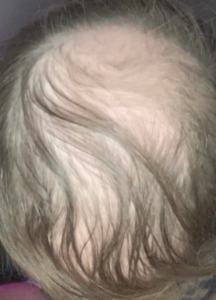 Necrosis is cell death in this case the result of probably the way the recipient sites were make. In over 16,000 hair transplant surgeries performed by our group, we have never seen a case of necrosis. The majority of times, this is a technical failure in the use of instruments combined with too much epinephrine in the anesthetic solutions used; however, there are diseases that can cause this which the surgeon must be aware of. This would will take about 2 months to heal with good surgical management. A scar will be left behind which can be transplanted. 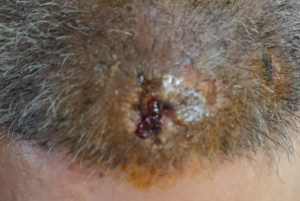 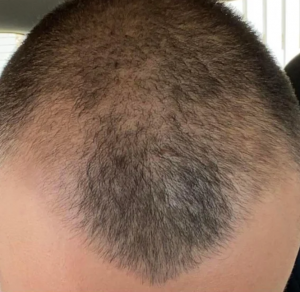 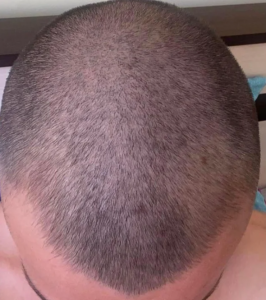 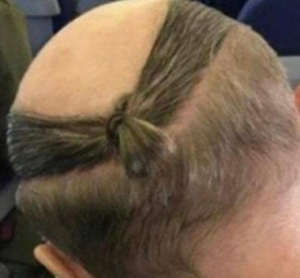 Dr. Robert True wrote a very interesting article in the May/June issue of the Hair Transplant FORUM. He suggested that today’s surgeons should consider using the hair outside the SAFE DONOR ZONE. The rational is reasonable even though we expose our patients to some eventual loss of hair if their inherited hair loss pattern would become an advanced Class 6 or 7 pattern. I have always believed that this is a slippery slope because patients might get angry or depressed if they lost their transplanted hair earlier than their 60s of 70s or even later.  The advanced Class 6 pattern as well as the advanced Class 7 pattern of balding, does occur in young men and if they were to progress to one of these patterns of balding (for example) two things would become evident: (1) if they had an FUE, the area that the hair came from would show the scars from the FUE punch and they would be very detectable to any observer, and (2) some of the transplanted hair would fall out after it grew for a while (because the hair that would fall out was genetically destined to die early.

The solution to the scars are relatively easy, just use Scalp Micropigmentation to hide these scars.  The solution to the advancing hair loss would require a series of actions between the doctor and the patient at the time of the hair transplant.  First, any patient willing to have this done knowingly (emphatic that the patient needs to understand this process 100%) then the surgeon can plan for future transplant loss by segregating the grafts as they are put in place.  For example, the hairs that are removed from the 3 inch high PERMANENT DONOR ZONE (it is really 2 1/2 inches for advanced Class 7 pattern  balding), could be placed in the front and top of the head (from the frontal hairline to mid-head) leaving the questionable hair that could be lost in the back of the head. If these hairs were well mixed together randomly at the time of the hair transplant, then the loss would be relatively uniform.   As such, as the man got older (say 2-20 years after the hair transplant) and his eventually Class 7 pattern emerged (the example I am using), he would have had a fuller head of hair for as long as these non-permanent hairs lived. Nobody can predict the time until some or all of these non-permanent hairs will live, but hopefully the man would see a uniform thinning and eventual balding reoccurring at a time that is more acceptable to him.

Unfortunately, many surgeons today are doing such harvesting with FUE anyway without telling the patients that this may result in a loss of some of the transplant hair in the future. The doctors do this for many reasons, economic or otherwise.

I tell my patients that 2-3 days is a good number. Minoxidil produces dependent hairs and you don’t want to lose them

This article reports on 4 patients who had occlusion of the ophthalmic artery with irreversible blindness after PRP injection of the face, the most common cosmetic procedure performed today. It shows the risks associated with PRP into the face.  In addition to the case report in the article below, another doctor reported 3 more cases of blindness associated with facial PRP especially when injected in the glabella (area are of the forehead near the upper bridge of the nose.

If you’re a Norwood 7 do you still have the 100,000 hairs that you were born with but they are miniaturized stuck in the telogen phase for decades or does DHT completely destroy the follicle?

If you are a Caucasian and have a typical donor density with 110,000 hairs on your head and then you develop a Class 7 pattern, the follicles that disappeared may be there and alive in the form of inactive stem cells for a number of years. After some time (don’t know the time-line), these stem cells are thought to die off. Maybe 10, 20 or 30 years have to pass. We don’t know. I am about to treat such men to find out with a possibly cure for hair loss so in a year, maybe I can tell you what I found.