This young man (Joe) believed that he was starting the balding process that his dad had (a Class 7 pattern of balding). His father was with him today and he told me that he started balding when he was in his very late 30s. That was unusual for a man with a Class 7 pattern of balding (just a rim of hair around the head) as most men achieved that pattern in their 20s. Joe had early recession in the corners of his hairline.

This is what I told him and what I did: “You were concerned about the balding in the family with your father developing his advanced balding pattern in his late 30s (unusual). We performed bulk measurements on your hair today and much to my surprise, the balding you are experiencing is very mild and early with less than 9% hair loss behind the frontal hairline and in the top of your head. At the age of 24, you might be able to hold on to your hair for years if you use the drug finasteride. We discussed the potential side effects of this drug and I told you to call me if you should develop any of these.”

This shows the value of the HAIRCHECK test for hair bulk measurements. Although he thought that shaving his head was a good option and receiving Scalp Micropigmentation rather than face his fading hairline every year, month by month, I felt that he had a good chance to keep his hair and postpone any more thinking about his balding. This is very important for any young man. At his age, thinking too much about his hair replaces the real important things in life. Hair may not be important for him to worry about for years to come.

Say the only person in my family with hair loss is my grandpa, but he mostly receded at the front and temples. If I inherited it from him, would I have the same type of hair loss? Also, my hair is nothing like his, it was straight, black and very thick before balding, whereas mine is light and frizzy much more like my other grandpa who had no hair loss.

Answer: The character of your hair is different from a genetic approach than the balding pattern which you may have inherited from your grandfather. If your pattern is the same as his pattern when he was your age, then it is likely that you will have his pattern of balding.

In medicine we call everything by its Latin name and it is on both of his knees. This is what it is called: Bilateral Hairy Kneevus 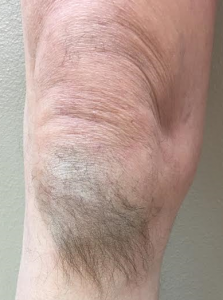 My advise to balding men, particularly for those reading this on baldingblog.com, is that for those of you over 40 years of age and every five years thereafter, you should get a coronary artery scan for calcium (it is a CAT scan) which picks up early coronary aging. For 70% of men, the first symptom of heart disease is death, so take this advice and put it into your overall preventive health picture as you will never know that you had heart disease when you drop dead. All of my friends and family over the age of 40 have had this test at my insistence, including myself. What I learned about myself, will save my life and hopefully allow me to match my grandfather’s age, when he died, at 102.

Merck’s controversial hair loss drug Propecia (generic: finasteride) has been linked to penile fibrosis, a serious sexual disorder which is also known as Peyronie’s disease. This condition can cause severe genital malformation, as well as persistent urological problems. Signs and symptoms of Propecia-induced penile fibrosis may include excessive curvature of the penis, pain during intercourse, erectile dysfunction, indentations in the penis, and genital shrinkage.

In the tens of thousands of prescriptions I have written, no one has ever presented with this condition to me, which to me means that this is a very rare side effect. The incidence of this problem in the general population is reported to be as common as 13%. I do not examine men with an erection so unless they reported this problem to me, I would not know if they had developed it on the drug. I mention this because it is my responsibility to post any such possibility that links the drugs I prescribe to conditions that it may produce.

Humans do not have seasonal shedding of their hair. People keep a constant amount of hair on their head except for their normal daily loss of about 100 hairs/day. Other mammals shed.

Follicular Unit Extraction (FUE) is promoted by many doctors as a scar-less surgery. This is never true. All FUE surgeries produce punctate (small) scars which appear at every site where a grafts is removed and can be seen only when the scalp is shaved very closely. Although many patients never see these scars, some of those who shave their donor area hair come to see us to address these problems with Scalp Micropigmentation (SMP). In some patients who have large FUE sessions (sessions between 2500-6000 FUE grafts), large scars may appear. Examples of such large scars as shown in the photos here and are the result of a combination of factors including (1) possibly too many FUE grafts in the surgery, (2) repeat FUE surgeries which may have produced vascular problems, (3) surgical techniques, (4) the anesthetics used, (35) the size of the punches used) and many other factors too numerous to mention. Some patients have come to see us with necrosis of the donor area (gangrene) and unlike the scars that appear in the photos which usually reverse, those with necrosis have permanent scars that do not go away. The good news is that we treat most of these people who come to us with bad scarring, punctate scars that bother them, donor site depletion of hair that produces a see-through donor area, and those with necrosis with scalp micropigmentation (see: https://scalpmicropigmentation.com/scar-covering/). 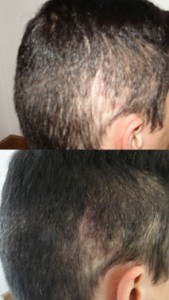 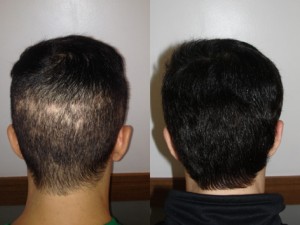 Minoxidil is commonly used world-wide a an inexpensive solution to hair loss and it seems to work for men and women. Minoxidil was originally used for the treatment of high blood pressure but it was not a reliable drug for this purpose.

When used for the treatment of hair loss, it can reverse the hair loss even in genetic balding, especially when the balding is early in the process. In the United States it would have to be prescribed by a physician as an ‘off-label’ drug as it is not approved for use in hair loss by the FDA. It is, nevertheless, a reasonable option for men who can not tolerate finasteride if they experience sexual side effects. For women, the appearance of hair elsewhere in the body and face can be a problem and other side effect, rare or otherwise include:
Hypertrichosis (80%)
Abnormal ECG (60%)
Hypotension
Pericardial Effusion (3% more common in women than men)
Chest pain from Angina
Cardiac Tamponade (rare)
Fluid and sodium retention
Pericarditis
Taccyarryhhmia
Stevens-Johnson Syndrome (rare)
Hirsutism

A number of patients (many under 30 years old) are coming in to our office and telling us that they only want one session of FUE transplants and don’t want more in the future, and it is because they see these advertisements on the internet that say that this is possible. Many of the doctors who do such promotions, do large numbers of FUE grafts, going into areas that they should know that these hairs will be lost over time, even though the hair is strong at the current time. Both FUE and FUT docs are involved and it shows the greed of many doctors, to get as much money from these impressionable young men who can delay the purchase of a car for hair. We try to tell these young men that what they are reading is unrealistic; however, I guess they go to the one-session docs anyway because of significant sales tactics. I am personally disgusted at this type of physician behavior and wish that at least some of these young men get the message that they are becoming victims of doctor greed. I just had an internet link to a patient who had 5000 FUE grafts from such a doctor. When reviewing his before pictures, it was obvious he was sold something that was not in his best interest. His results were very disappointing and to make matters worse, the surgery accelerated his hair loss making him worse off and significantly poorer for doing the surgery.

You performed hair surgery on me in 2009. I thought you might be interested in something I’ve discovered.

Since 2009, I have been taking Finasteride. It was very effective in stopping hair loss, and even regrowing some of the more recent hair losses. The problem was that after several years of taking the drug, my system seemed to become less responsive to it, and regrown hair started falling out again. I increased the dosage from ¼ pill to ½ pill. That was effective at stopping additional losses and some regrowth. Then, gradually, the new, higher dosage became less effective, as well. I then increased the dosage to a full pill per day. The same phenomenon of hair regrowth happened again. You advised me (see below) to not exceed the 1 pill per day dosage. The situation seemed stable, although not as much hair regrowth as when the drug was still relatively new to my system.

Then I came across an over-the-counter supplement that I tried. It is called Restore FX by North Star Nutritionals. Here are the contents:

I started taking this supplement in addition to the Finasteride in February, 2016. Over the next several months, I noticed the hair started regrowing thicker than it had ever done previously, even when the Finasteride was new to my system. Then, in July 2016, I decided to discontinue the Finasteride to see what would happen. Since discontinuing the Finasteride, my hair growth has stabilized, and no significant hair re-loss has occurred. That has now been nearly 5 months of stable hair growth without Finasteride (Restore FX only).

I have also noticed that since discontinuing Finasteride while still taking Restore FX, the adverse effect on sexual performance (e.g. decreased semen flow) has diminished.