Amazing results from finasteride on the frontal hairline which is not common.

I’m wondering if its possible to begin to have a receding hairline/thinning crown/diffuse thinning, without there being an associated increase in hair shedding (i.e. when styling hair, washing it, on bed). Every article I read says that MPB puts more hair in the shedding phase, so that should mean MPB and shedding are correlated. But isnt it possible to go bald without any noticable increase in shedding? In other words, maybe the 50 – 100 hairs you lose a day, while normal by all metrics, simply just dont grow back.

I would think that for diffuse thinners/crown thinning, there has to be an increase in shedding since it covers so much area… But for hairline recession maybe less so because the temples are a smaller region?

Recession and balding can occur separately, but developing an extensive balding pattern will produce shedding in all men eventually

I started using min and ive noticed very tiny hairs growing on my forehead way below my hairline and temple are between my eyes and hairline. Is this an unusual sign or is this common? Also my temples are receding slightly and the top is fine.

I’m nearly 25 and my hair is slowly getting worse I want to start finasteride but not sure if its wise to delay it Some of the reasons why I’m thinking of delaying.  1 potential side effects / permentant change in hormonal profile 2 possibility of hair getting worse 3 long term cost. At the same time I want to start to keep what I have

If you take finasteride and, worst case, get side effects of any sort, you can stop the medication. In my fairly extensive experience I have never seen permanent side effects that don’t go away with stopping it.

You have early balding with a Class 3A Norwood pattern with a persistent forelock. The forelock can be strong in some men and if it lasts till the age of 35, it usually lasts your lifetime even if you continue to bald in the ‘A’ pattern. You can see the thinning around the forelock from the photos and the arrows show the upper part of the 3A balding pattern. 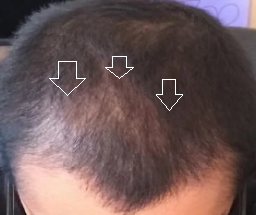 Take a look at Catherine Zeta–Jones‘s hairline (images on google) and you will note that the distance between the hairline and the grove between the nose (Glabella) and the distance between the tip of the nose and the chin are equal. A balanced hairline therefore is critical to femininity.  Add to that the shape of the hairline on this actress as it is round. Men have V-Shaped hairlines, not rounded as a rule so the shape of the hairline controls the femininity issue as you can see in  this link: https://newhair.com/before-and-after/hairlinelowering/#results how hair transplants can control both of these factors.

Great early response to finasteride. The arrow points to the area with the change showing that finasteride in young men can reverse frontal hair loss/balding and recession

This Reddit poster did a good job at summarizing the key elements everyone must understand. I would add:

2- be sure you research the doctor you are going to use and develop a Personalized Master Plan for your hair loss with that doctor so you can set realistic expectations. Although coarse hair is the best hair caliber, many men get great results with medium weight hair and even fine hair if the balding pattern is not very extensive.

3- realize that over the years, hair character changes with age, often becoming finer so plan for these changes in your Personalized Master Plan

What Makes a Good Candidate for Hair Transplantation Surgery from tressless

My grandfather (mother’s father) had a perfect juvenile hairline and no hair loss when he died at 102. It happens and not everyone loses their hair or their juvenile hairline. Most of his sons had perfect hairlines as well and the children of these men might inherit the same hairline qualities.

Just to say that my semen is back to normal viscosity (as attested by the GF), almost three months after starting finasteride (it was watery).

If you haven’t tried finasteride, it is worth considering as it might reverse some of this thinning. If you add minoxidil the chances are even greater for a benefit without a hair transplant. 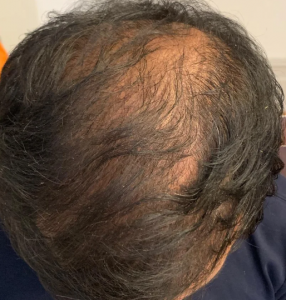 Dr Lorenzo is one of the most famous FUE surgeons in Europe. He claims that “The greatest benefit of the FUE technique is that there is no damage done to the follicular units during extraction<quote>
source : http://injertocapilar.com/differences-fue-strip/?lang=en”  How would you comment that. Based on what you write on your site the above is a false claim.

I was impressed with this review. There is some more guidance on how individuals are using the microneedling in this post.

My thoughts on microneedling depth, based on 3 papers. from tressless

I’m 24 year old with stable nw3 hairloss pattern. Is a hair transplant worth it if I cannot tolerate finasteride?

Many men will seek out a hair transplant if they can’t tolerate the drug finasteride. That works if you are not losing a lot of hair and developing an advanced hair loss pattern at the time you want to do a hair transplant. Hair loss patterns can be stable in some men, so a good surgeon will tell you what your situation might become for planning purposes. I certainly do that for all of my hair transplant patients under 30.

I responded with, “If I go bald, then I’ll just have to deal with it and go on with life”. It felt so empowering to embrace the fact that I might be bald someday. If she thinks I’m ugly, then that leaves another 4 billion potential females who might find me attractive.  This girl and I are just friends by the way and I don’t think she knows my hair is thinning.

Society has prejudices. This is well illustrated in two observations: (1) Since Eisenhower was president, no president has been elected that has been bald because society thinks that bald men can’t be trusted. Men’t Fitness magazine did a study that showed that society felt different about bald men vs hairy men. I think that is why our sexy movies stars have good hairlines. (2) I ran a talk radio show called The Inner Man for a year in Los Angeles. Although my focus was not hair issues but religion, sex or social issues, I remember one show where I talked about hair and societies attitudes about it. One man called in and he was the Vice President of Marketing and Sales for a Billion dollar company (he did not say who he was just what he did). He told me that he would never hire a bald man because bald people couldn’t be trusted. As a side note, he said he was completely bald but he was trustworthy, different than everyone else.

People who are superficial don’t look below the surface of most things (balding included). I am sure that your ‘girl’ friend would not abandon her friendship with you if you started losing hair. She would be very supportive.