This man had his surgery done by Dr. Zarev (Sofia, Bulgaria) who put together an outstanding team to be able to perform up to 6,000 grafts in a single day. I have seen him working at various hair conferences with video access and therefore understand the way he organized his team.  Dr. Zarev is unusual in that he built a team that can exploit graft sessions that maximize the patient’s donor area in a one or two day surgery.  This patient was done in two sessions totally 11,620 grafts with spectacular results. Apparently he had still another session some 9 months later. I would warn the reader not to assume that they can get such results as explained below.
What was done: This is not the typical patient because to support 11,620 FUE grafts from the donor area, his donor density must have been substantially higher than the average man’s donor density. I have had only a few such patients, one shown here: https://baldingblog.com/norwood-class-7-pattern-patient-received-11000-grafts-plus-smp/.  For the typical person with an average donor density with an average Hair Mass Index, they would almost certainly develop a see-through donor area as shown here if they transplanted 11,620 grafts: https://baldingblog.com/another-case-of-an-over-harvested-donor-area-from-fue-photo/. They would avoid this if their donor density and Hair Mass Index was significantly above average.
The Mathematical Analysis: Mathematically, to support this many grafts, the donor density must be at least 50% higher than the average man’s donor density [the average Caucasian man has 55,000 grafts on their head of which 25% or 13,750 grafts are found in the donor area].  Let’s say 2/3rds of the 13,750 grafts are removed from the donor area in this typical average Caucasian male. That would leave only 2,130 grafts remaining (13,750 grafts originally in the donor area -11,620 extracted = 2,130 grafts remaining). If this man only had 2,130 grafts in his donor area remaining, he would likely develop a see-through donor area which is clearly not the case as shown in the after picture here.
Working with men who have a high density and who have a better than average Hair Mass Index makes the surgeon perform ‘miracles’ as shown here. But what are we actually seeing?  Let’s dissect this ‘miracle’. We are seeing the results of 11,620 grafts covering an area that would normally contain approximately three to four times that  amount of grafts (34,860 – 46,480 grafts) that would have been present in the transplanted area before this man became bald. So clearly, what we see is the result of more than just hair. It is the result of the art of the surgeon who understands how to distribute these grafts and weight these grafts to look ‘full haired’ from every angle.  I would expect that the leading edge of the frontal hairline was built denser than other parts of the head. As you look at the donor area, this man still has more FUE grafts that can be used for future surgeries if needed.
There is never a substitute for a great surgeon who put together a great surgical team. I have put this analysis together for those of you who really want to know the reality of the hair transplant process they often see or fail to see.
I congratulate both the patient and Dr. Zarev in the results shown here. 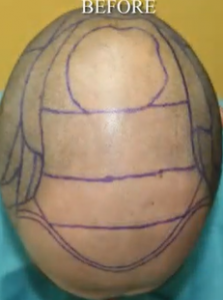 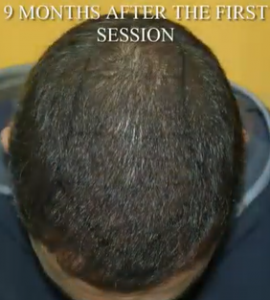 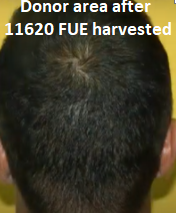 I Burned Myself and Lost Hair
Lace Weave and Hair Loss
What Is The Importance Of Dihydrotestosterone -DHT And How Does It Relate To Propecia and Brain Fog?
Depleted donor area
Am I Too Young to Lose Hair?
Is Female Hair Loss Related to Female Facial Hair Growth and High Testosterone?
Get a virtual consultation with Dr. William Rassman and Dr. Jae Pak for hair loss options. You can learn more by scheduling an appointment.