Dr. Nghi, a surgeon in South Vietnam worked with me as I volunteered to assist South Vietnamese Civilians and wounded soldiers while I was in Vietnam. He was fortunate to be evacuated and ended up in Camp Pendelton when I was able to connect with him in 1975. I sponsored him and his family of 8 others including his wife and two children, plus other relatives including his wife’s father and mother. He joined me in my Surgical practice in Vermont, working as a physician assistant while studying for his examinations to get a license to practice medicine in the United States.  After 9 months, he took the examination and passed it on the first round. With some help by me, he went onto to Dartmouth in Hanover New Hampshire and studied Anesthesiology for 3 years. When he left Dartmouth, a special award was created for him to recognize outstanding service while he was there and was offered a faculty appointment. He decided not to take the appointment and moved to Pittsburgh where he has been practicing anesthesiology every since. He has been active in helping Vietnamese refugees resettle and has been invited to the white house twice to be recognized as an outstanding community contributor. His family now extends to more than 40, all highly successful and integrated into American life. He has four children, an OBGYN doctor, a PhD researcher, a district attorney and a pharmaceutical Vice President. He told me that America gave him and his entire family the opportunity to succeed through hard work. He loves America. Below is this presentation posted by the History Museum in Pittsburgh just this week to honor Dr. Nghi and his family. 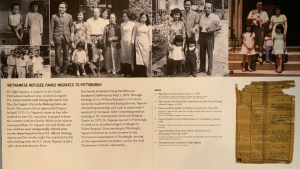 3 months on finasteride with good early results (photo)
Does Having a Lot of Body Hair Cause Faster Balding?
Is the reason for doing FUE that it does not produce alopcia in the donor area?
My Father and Uncles Are all Bald, So Am I Doomed to Lose Hair?
Can the Microwave Oven Cause My Hair Loss?
One of the early finasteride studies here
Get a virtual consultation with Dr. William Rassman and Dr. Jae Pak for hair loss options. You can learn more by scheduling an appointment.