I have been suffering from an undiagnosed case of hairloss for almost two years now. The thinning occurs only in front of the ears in a circle around it and slightly on the nape. No thinning crown and my frontal hair line has been stable for years. No cases of hair loss in my family. The thinning started about two years ago and hasn’t really changed (for better or worse) since then.

I’ve been to FIVE different dermatologists and none could tell me ANYTHING. “Ive never seen that before”, “I can’t help you”, “It’s probably not what you think (male pattern baldness)”

The trichogram that was taken has showed no signs of male pattern baldness on other parts of the head. The results did not show anything suspicious. Tests for nutrient deficiency also didn’t show anything, but that’s been a long time ago so if you have any specific nutrients under suspicion let me know. I do not respond to Minoxidil. A two-times-daily treatment of nine months brought no growth whatsoever.

The Trichogram should have shows a high degree of miniaturization in the area behind your ear in the photo. You could have Diffuse Unpatterened Alpopecia (DUPA). Send me the photos taken for your trichoscopy for the entire donor area and then I will give you an opinion and possibly a diagnosis 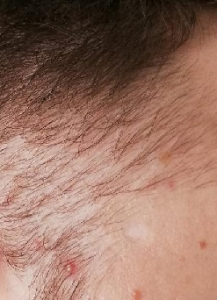 Medscape and Dr. F. Perry Wilson questions the value of stems cell treatments and relates it to…
I am a 30 year old male and a doctor told me that I needed a balloon…
Can You Make My Hair Less Fine? (Photo)
Movie from Sundance Film Festival About Balding Shown on Reddit (Funny Cartoon)
In the News - Divorce and Female Hair Loss
Finasteride, minoxidil and microneedling for 9 months
Get a virtual consultation with Dr. William Rassman and Dr. Jae Pak for hair loss options. You can learn more by scheduling an appointment.