I read that [name removed] is suing the hair transplant network since they expressed their reservations about him and his questionable ethics, deceptive marketing practices, as well as issues with his hair transplant technique both FUT and FUE. I also believe that you are the person who invented the FUE technique. Is that right? Do let me know since I would want to know if this doctor is as good as everybody says he really is.

[Editor’s note: The above question has been changed to omit the names of the doctors and to avoid adding fuel to the fire] 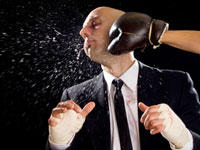 You ask a loaded question, but I will keep this as simple as possible, even though it will get quite lengthy.

FUE and the doctors that use this method:

Yes, I introduced the follicular unit extraction technique (FUE) back in 2002 at the International Society of Hair Restoration Surgery (ISHRS) conference in Chicago and published the classic article on the subject in the Journal of Dermatologic Surgery that same year. FUE as a new procedure had many people interested, but when the doctors actually began to use the technique, they quickly realized that it was tedious, difficult, and required a real change in the way the surgery would be delivered, so in the long term it was not welcomed by most of the surgeons. Even today with the attention to detail required to minimize damage from the technique, it is not routinely offered by many doctors. However, with increasing demand by the consumer, more and more doctors seem to claim “expertise” (even if they can’t do it well) since there is a lot of money to be made in offering this service. Putting 2000 holes into a person’s scalp does not mean that 2000 viable grafts will be produced that will eventually grow into a nice head of hair. So some doctors offer a service and simply can’t deliver the goods. Being a “minimally invasive” surgery, FUE is certainly a great procedure and it sells well so marketing it is not difficult. It is virtually painless in the post operative period and it leaves virtually no detectable scarring (small punctate scars) unless the head is shaved, but most patients do not realize that there are also limitations and problems with the FUE procedure itself, such as how you will not know if it worked for a good 8 months after it is performed and if the surgeon could not perform the procedure as promised, the check will have cleared his bank account. Unfortunately, there are deceptive marketing practices everywhere you look and as I always say, let the buyer beware.

At the recent ISHRS physician meeting in Montreal last week, many doctors were claiming to do FUE in numbers that boggle my mind. I would say that some of the claims I heard by some of the doctors were unbelievable, and as that is my personal opinion (as the inventor of the procedure), it is an opinion that needs to be shared with you. In the next week or so right here on BaldingBlog and on the NHI site, I will publish an extensive discussion on FUE, which I’m presently writing with the goal of educating consumers about spending thousands of dollars on a procedure that could fail. I want to provide tools that might help them avoid getting trapped into deceptive practices that may be relatively commonplace. Stay tuned for more on that.

Legalities and understanding how these Internet marketing sites work:

With regard to the litigation, the sponsoring agency central to the lawsuit is the Hair Transplant Network (HTN) and they have been fairly open about the problems as they see it. Although it is no secret, I must point out that HTN levies fees to doctor members for their participation in advertising and promotional activities. They maintain the position that they have a responsibility to judge the value of the doctors’ services and the doctor’s ethics. They restrict their membership only to doctors they feel are worthy, ethical, competent as well as those doctors who are willing to pay them their monthly participation fee for their services. You can imagine that such a set of activities can not only rub some of the doctors in the field the wrong way, but could be frankly damaging to the doctor’s worldwide reputation. The damage comes from either comments that might be made that denigrate the doctor’s skills by directly discussing his/her practice, services, or ethics, or by excluding specific doctors who are not paying the monthly marketing fee when the site’s contributors discuss the best doctors in the field. It is like saying, “to be a great doctor, you have to be willing to pay the monthly fee”. An omission of a doctor from the “best doctor list” itself can be perceived as a statement reflecting the unworthiness of a doctor to potential buyers who are shopping for hair transplant services. HTN is a privately held business and will do what its owners believe are in the best interest of HTN, their audience and readership, the consumer, or their participating doctors. The doctors involved in this particular litigation also have their own self-interest and self-preservation focus. What claims are made about a doctor’s ethics or skills may or may not be true, so how this particular litigation unfolds will tell us much about the facts as the legal process goes forward. For those interested in reading more from the HTN’s side of things, follow the thread on their forum and draw your own conclusions on truth and justice.

There are three words that trouble me with regard to all of the “consumer advocacy” sites and web forums â€” “conflict of interest“. As stated above, doctors have to pay HTN and other such sites to be included among the list of recommended doctors. Promoting member doctors can be costly and the crux of any business is to have income that exceeds expenses (therefore producing profits), and I am fully in favor of the capitalistic business model. There is no doubt that I am very much into free enterprise, provided that fairness, honesty, and truth remain central to the business process where conflicting interests and the profit motive do not outweigh the integrity of the process.

So there’s my 2-3 cents, and I hope it gives everyone something to think about.

Does Hair Dye Cause Hair Loss?
My Hair Regrew with Propecia and the LaserComb
How Available Is Dr Rassman?
Did Applying Nair On My Scalp Cause Permanent Damage?
Switching from ScalpMed to Generic Minoxidil
New Study - Body Dysmorphia Due to Visual Processing Abnormality
Get a virtual consultation with Dr. William Rassman and Dr. Jae Pak for hair loss options. You can learn more by scheduling an appointment.