Hello, I’m 26 years old and was curious if I have a juvenile or mature hairline in my photo. My hairline has been the same since I was 16 or so by looking at past photos and I’ve had no hair loss or recession in other areas. The current length of it is 1/2in.

You have my permission to use for the site. 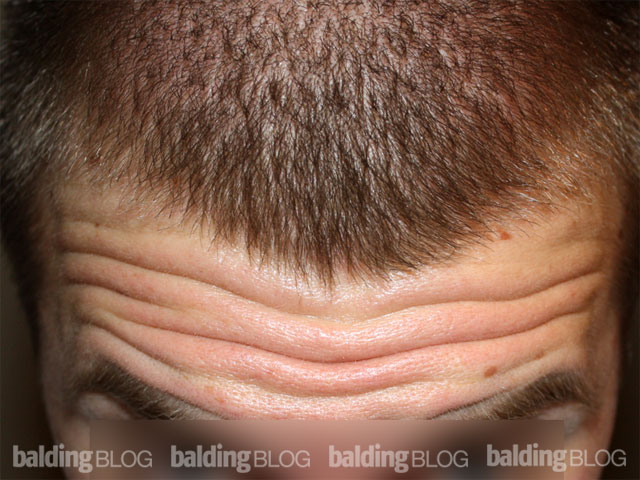 This is a great picture because you wrinkled your brow, as I always ask my patients to include in their photo, is touching the highest wrinkle. If you follow the highest crease, that is where your hairline was when you were 7-9 years old. The corners are rising very slightly, but this is still in the Norwood class 1 category and I would consider this a juvenile hairline still.

There is a wide range between when your hairline hugged the highest crease to a fully mature hairline. What is noteworthy about your present hairline is that the mid-line ‘kisses’ the upper crease, which is clearly the same hairline you had in the middle when you were between 7-9 years old.

Female Corner Hairline Loss - An Interesting and Unique Situation (with Photos)
How Can an 18 Year Old Lower His Hairline?
Juvenile Hairline and the Wrinkled Brow
Depending on How I Brush My Hair, It Looks Like a Juvenile Hairline
Can I fix my high hairline?
Why Do Hair Loss Treatments Not Work in the Frontal Hairline?
Get a virtual consultation with Dr. William Rassman and Dr. Jae Pak for hair loss options. You can learn more by scheduling an appointment.