is now a well known method to hide old hair transplant linear scars.  You can view many before and after photos on my website.  Nowadays there is an uptick at my clinic in Los Angeles where I am seeing many unhappy patients with FUE scar.  These unhappy patients are finding out FUE is NOT a scar-less or “no scar” surgery often advertised on the Internet and misrepresented by their doctors.  Look at the FUE scar before photo and Scalp MicroPigmentation treated after photo.  The before photo shows the result of a mottled, moth-eaten appearance, the consequence of a about 1000 graft FUE session. This condition which is now springing up all over the world as more clinics offer large FUE sessions ranging up 3000 or 5000 grafts a session.  There are reports of skin necrosis and open wound infection.  If you add up the total  wound from a 3000 graft FUE surgery the collective open wound would be the size of a baseball.  Imagine a bleeding open wound the size of a baseball on the back of your head.  When you put it this way, FUE is not necessarily a minimally invasive surgery after all.  While I’ve always been an advocate for large “Mega-Sessions” during the 1990s with strip surgery, you must think twice about FUE Mega-Sessions.  These large FUE Mega-Session depletes the donor area and many men often complain about the see-through look on the back of their head.  In an attempt to avoid a linear scar, these patients inherited another set of problems.  In certain cases, the FUE scars can be treated with Scalp MicroPigmentation but the low density issue still remains.  In my practice we try to limit the FUE session well below the 3000 graft range to avoid the moth eaten appearance of the resulting FUE scar. 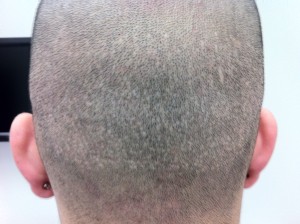 Moth Eaten appearance of a FUE scar Before and After SMP