My husband began balding at 24. He is epileptic and a switch to a different anticonvulsant exacerbated what doctors say is genetic hair loss. Within a year, he lost 50% of his hair. Because he lacked health insurance, his doctor refused to allow him off the medication. It was not until it stopped working that we again switched.

Although he stopped taking the medication, his hair never returned. It continued to shed in tremendous amounts. Along with it went his self-esteem and all the things he liked about himself. In June of 2018, we met with a dermatologist that suggested finasteride and Minoxidil 5%. The first photo is from then, when he first began taking 1 mg/day. It is still his current dose. In addition, he uses Kirkland Minoxidil twice a day and Nizoral shampoo three times a week.  In addition, he does microneedling once a week. He sure has come a long way and I am proud of him. 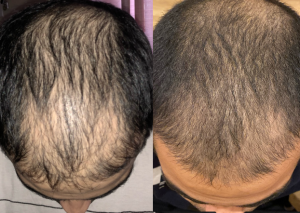