I was wondering whether it is possible to go from miniaturization such as these pictures of david beckham (click both links): Beckham 1, Beckham 2

My question is, beckham actually cant take finasteride as sports wont allow him to take the medication. How is it possible to go from quite severe miniaturization to a good head of hair. Also is not a wig or hair piece as he shaved his head off infront of a live audience. Is it possible to get the results that Beckham has some how and with what. 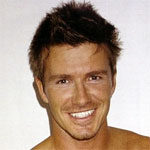 I’ve written about David Beckham before, and I agree that his hair does look great now. A see-through look can have multiple causes:

And if there is actual hair loss, it could’ve been from stress in his life or some other medical issue causing some early acceleration of genetic balding… or this whole thing could’ve been as simple as poor/unflattering lighting. It’s tough to tell how real his loss is based on photos from differing angles and light sources.

Can medication be completely ruled out? Finasteride was at one time banned in most professional sports, but the World Anti-Doping Agency has removed it from their prohibited drug list. I don’t know if that applies to the various soccer/football leagues.

Why Do Men Want to Switch from Finasteride to Dutasteride?
What are the long term side effect of finaseride?
I have let my hair grow but the donor area is still see-through (photo)
Congenital Adrenal Hyperplasia and Hair Loss
The invention of Cardio-version for arrhythmia of the heart
finasteride and mis-information
Get a virtual consultation with Dr. William Rassman and Dr. Jae Pak for hair loss options. You can learn more by scheduling an appointment.