Okay, let’s say theoretically that saw palmetto does in fact help to block DHT. My question is, how the hell did they figure out that saw palmetto berries reduce DHT and not other berries out there such as cranberries and/or bilberries? 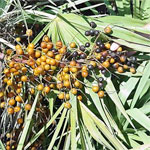 Saw palmetto has been around for hundreds of years and has been used successfully for treating prostate enlargement. Native Americans used saw palmetto to relieve urinary symptoms in older men who had difficulty in urinating. It has been shown to reduce prostate size and it is used quite frequently in Europe.

There are many potential side effects of saw palmetto, including abdominal pain, diarrhea, nausea and vomiting, erectile dysfunction, breast tenderness and loss of libido. That is the connection that made people think that there is a DHT blockade in process, as so much seems to parallel finasteride’s side effects. Some think that since finasteride works for the prostate and hair, then if saw palmetto works for prostate issues it must also work for treating hair loss. Unfortunately, saw palmetto has never been studied in any well planned clinical endeavor for treating hair loss.