My medical hair history: I entered the Hair Transplant business in my private practice forming New Hair Institute in late 1991. With a partner who had done thousands of hair transplants at Bosley, he and I worked together. My crown was balding and my wife told me that it was bad business to have a bald crown and then talk to patient about treating their bald crown areas while I had one. So my partner recommended Scalp Reduction Surgeries (I had three of them, one every 2 months completing the sequence of surgeries in 6 months). What happened was historic. By the last of the three surgeries, my bald crown came back and my scalp was scarred badly.  As soon as I realized I was deformed, I picked up the phone and called the worlds expert in the field at that time (no name here because he is still alive) and told him about my problem, asking him how often he saw such problems (I was thinking it was rare). He said it was very, very common, in fact, most people had their bald areas return.  I followed up with: “Why didn’t you publish these results and stop the surgeries from being done?“.  He responded: “It would have been bad for business!”  I felt sick and disgusted with him and his comments as now I was both a victim of this horrific surgery (the removal of the bald area in the crown) and a doctor who had already started doing them on my own patients (6 surgeries, one on my own first cousin and best friend). All 6 people had the same thing happen to them, so I tried to make amends with them by giving them hair transplants to solve their bald crown area.  I also started a campaign to DEMYSTIFY this horrific surgery and expose it for what it was, a deforming surgery. I published against it and spoke before the largest hair meeting in the world telling the audience: “That I would volunteer my services for all victims of the Scalp Reduction surgery as an expert witness in any malpractice case brought against anyone performing this surgery with the resulting deformities that it produced” . I was blackballed for about a year by other doctors who made a good living doing this surgery, but what happened was almost immediately after my announcement, the doctors that performed the procedure stopped doing it.  Now, it is rarely, if ever, performed.  To fix my problem, I had three hair transplant surgeries of about 900 grafts each over 25 years. Still, my crown was not as thick as I wanted it to be, so today I took the last step and had Scalp Micropigmentation performed on my crown.  My before (the first two photos) and after pictures (the last ones) are below.  Now any thinning that has remained is gone!  I practice what I preach!  Comment: I don ‘t think I look balding in my crown now, the first time in years that the problem is solved. The last picture was taken 6 weeks later (I think I got more salty color in my hair over the past month or so). 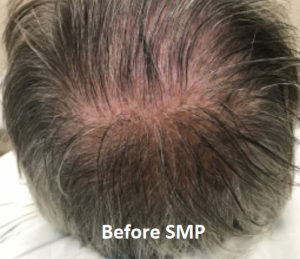 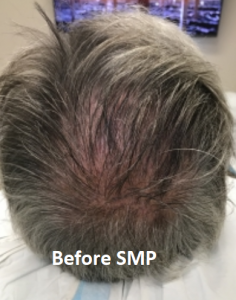 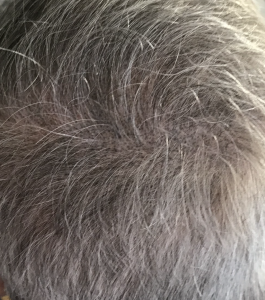