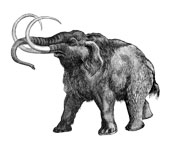 Tufts of frozen woolly mammoth hair have yielded a rough draft of its genome. It’s the most successful attempt to sequence the DNA of an extinct ancient animal to date, and although we won’t see resurrected mammoths grazing the tundra anytime soon, it could give us a peek into the reasons for their extinction.

Sequencing extinct organisms is tricky since DNA strands quickly degrade after death into short fragments that are difficult to piece back together. In porous tissue like bone, these fragments can also become flooded by DNA from bacteria and fungi growing on the decomposing body, making it hard to pick out the genetic material of interest.

This is very, very cool stuff. We can learn much about the genetics of an animal from the DNA of hair. Scientists now know that elephants and mammoths are closely related (more so than previously thought), and this is the best example of a near complete genome of an extinct animal, since they used an elephant as the blueprint.