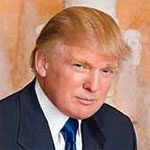 The dodgy seventies comb-over made famous by personalities like Donald Trump, Christian Bale in American Hustle and Bobby Charlton has been abandoned by modern men, according to new research.

Let’s be honest, the hairstyle, which saw men grow their side patches and sweep the extra hair over their bald patch, was never a good look. While men thought they were hiding a multitude of sins, in many cases they were actually drawing more attention to their lack of fuzz.

But modern men seem to have come to their senses. A study, by Crown Clinic in Manchester, reveals that the 21st century chap is opting for new methods to hide his lack of hair including shaving, covering up and going under the knife for transplants.

Read the rest — Death of the comb-over

This was just a survey of 1000 people by a hair clinic in the UK, but I’d agree that the comb-over is becoming less common than it seemingly was in past decades. With new surgical and non-surgical treatments available, men are able to take control of their hair loss rather than just styling the limited amount of hair they have.

It also helps that the shaved head look is fashionable, allowing men the option to just shave it all off or go for SMP to have that closely trimmed look.